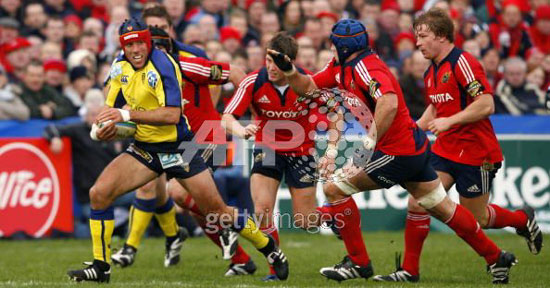 Clermont Auvergne President Rene Fontes has reacted angrily to the decision handed down by an ERC Appeals Committee to dismiss the appeal of Alexandre Audebert.

Clermont Auvergne President Rene Fontes has reacted angrily to the decision handed down by an ERC Appeals Committee to dismiss the appeal of Alexandre Audebert.

The ASM Clermont Auvergne flanker was found guilty of stamping on Ronan O’Gara during the Heineken Cup match against Munster at Parc des Sports Marcel-Michelin on Sunday, 13 January, 2008. However the Appeal Committee and ERC have incurred the wrath of the French club with ASM Clermont President Fontes wondering in today’s La Montagne newspaper, “what world do they (ERC) live in.”?

The article whose headline screams “Clermont Cry Scandal.” quotes the French Club President saying its a scandalous decision in light of the same Appeal Committee reducing Jerry Flannery’s suspension by four weeks. The vice-President of the Ligue nationale de Rugby (LNR) Patrick Wolff is fully supportive of the French club claiming the decision is a denial of justice and Wolff is threatening to cut Audebert’s suspension  in half (to four weeks) – in defiance of the ERC ban – to allow Audebert play in the Top 14 French Championship.

If Wolff pursues this unique course of action it would of course bring the LNR into conflict with their own FFR and the IRB and once again raise the prospect of another walk out by the French clubs from the competition.

It may be worth recalling that Audebert was cited for not one, but two offences in that game, and the first citing resulted from an incident that left O’Gara requiring twenty stitches to a gash to the top of his right ear. He was subsequently penalised for blatantly punching Alan Quinlan.

It would appear however that the French believe that Audebert’s actions were no more serious than Flannery’s although the Appeals Committee held that his (Flannery’s) primary act was to free himself from the bind (TV clearly shows him being held by the leg) while his secondary act caught Julien Bonnaire on the head. They determined the action to be reckless rather than deliberate but in Audebert’s case, the Appeal Committee upheld the original decision of the Disciplinary Committee who determined that the stamp on O’Gara  was of the top end in the level of seriousness.