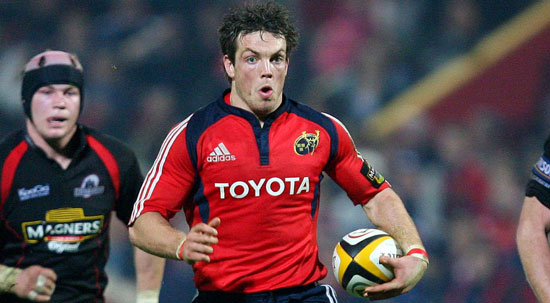 Such was his form this season he was a virtual certainty to feature on the Ireland A side that plays England A tomorrow evening but a knee injury sustained in the Magners League game against Connacht in December halted Ian Dowling’s impressive progress.

Such was his form this season he was a virtual certainty to feature on the Ireland A side that plays England A tomorrow evening but a knee injury sustained in the Magners League game against Connacht in December halted Ian Dowling’s impressive progress.

The Kilkenny man’s injury however was not as bad as first thought and he is hoping to return to action in mid to late February. Up to the time of his injury, Dowling had played in 12 of Munster’s 13 competitive matches this season.

Favourite Food:  Chimeechangas from the Texas Steakout
Book you are currently reading or have just finished: A Briefer History of Time by Stephan Hawkings. It was pretty average. Much preferred A Brief History of Time.
Favourite TV programme: Entourage or Californication.
Favourite Film: High Fidelity, Glengary Glenross.
Most enjoyable holiday location: Australia.
Favourite sport other than rugby: Hurling.
The sport you least like: Bog Snorkelling.
Person you would most like to meet: Catherine Thomas.
Sportsperson you admire most: Pretty boy Floyd Money Mayweather.
Where and when did you first play rugby:  Kilkenny RFC under 10’s.
Biggest influence on career: After my parents, coming to Limerick. There is only one sport you’ll end up playing when you come here.
Best career advice you were given: The rock that became the end point for the weak is the stepping stone for the strong
What you like Most/Least about being a rugby player: Playing sport 24/7. The injuries and the mental turmoil of not being involved on matchday
Best rugby memory: Heineken Cup Final 2006 or beating Sale that year in the group stages in Thomond Park.

Rugby team you admire most: Kilkenny, they would be a senior club now if it wasn’t for a couple of controversial referee decisions back during the qualifiers for senior status against Bruff and Queens.
Sporting event you would most like to attend: Next years All Ireland Final featuring Kilkenny and Cork. For Kilkenny to do the three in a row against them would be so sweet.
If you weren’t a Pro rugby player what would you be:The Dalai Lama for obvious reasons.
Plans for life after rugby and what provision have you made: Probably summit Mount Everest, compete in the tour of France and do the Sahara marathon. I’m just structuring the training schedule at the moment.
Advice you would give to aspiring pro rugby player:  Obstacles are simply stepping stones to greatness.
Three people you would invite to dinner and why:  Jesus Christ, Mary Magdalene and Dan Brown. We’ll get the story straight once and for all.