Howlett on the wing Quinlan on the bench 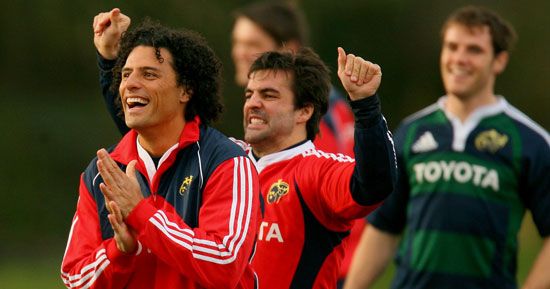 Doug Howlett has been named on the Munster starting XV for Sunday’s clash with Clermont Auvergne, while Alan Quinlan has been named among the replacements.

Doug Howlett has been named on the Munster starting XV for Sunday’s clash with Clermont Auvergne, while Alan Quinlan has been named among the replacements.

However, Paul O’Connell has failed in his attempt to be fit to take a part, the squad captain still troubled by the back problem that forced him to miss the afternoon session in Limerick on Wednesday.

“Paul suffered a setback during the week and is not able to train today, ” explained Declan Kidney, ” so in the circumstances couldn’t be included in the squad.”

Anthony Horgan, who was selected to play against Ulster last weekend picked up a  hamstring strain during the week and his absence opens the door for Doug Howlett to take his place on the wing.