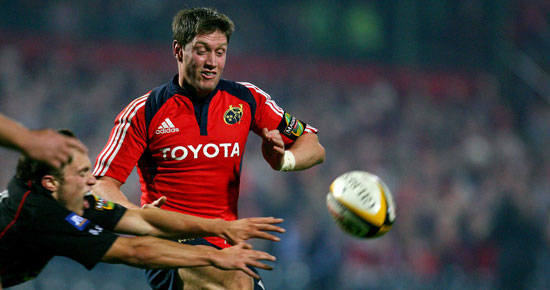 Even though they go into the afternoon handily in third place and with the possibility of going top, Munster’s tie this afternoon is fraught with danger.

Even though they go into the afternoon handily in third place and with the possibility of going top, Munster’s tie this afternoon is fraught with danger.

The general perception is that Munster did all the hard work last weekend in Stradey, the reality is that they will have to work even harder just to win this one.
The fact that the Scarlets are propping up the table and out of contention is no indicator whatsoever of the threat they pose particularly in conditions that will allow them play the fast paced quick off-load game they relish.
Nor can the side they are bringing to Limerick leave anyone in any doubt about their intent. Their talisman, Stephen Jones comes back from the neck injury that forced him out of the Stradey game but even more significantly is the presence in the side of skipper Simon Easterby. After the game last weekend, Easterby looked like he had just gone ten rounds with Floyd Mayweather, and he could have been excused had he opted to sit this one out. However, he is in at blindside and no one manages to get in Munster faces better than the Irish international.

Munster will need to have carefully studied the video of the opening half last week and paid particular attention to the threat posed by the Scarlets backs. They move the ball well from the set piece while they are as potent an attacking force in broken play as any team in this competition.

The Scarlets have nothing to lose and can play with an abandon that could pose huge problems for the home side but if Munster can keep their wits about them, particularly in the opening stages of each half, they can edge home.