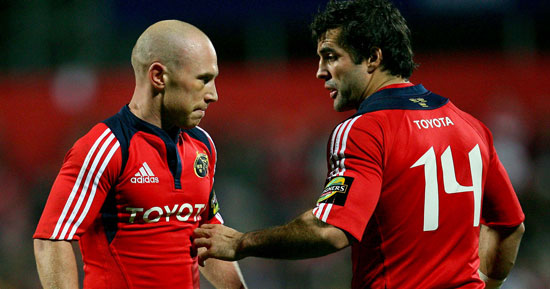 Now a Sky pundit Quinnell says, “Everyone is waiting for Munster to tip over the hill because they allegedly have an ageing side. Cometh the hour, cometh the Scarlets, I’m banking on a big backlash this weekend.”

And leading that backlash will be captain Simon Easterby who warns,”This group is far from over. From our point of view, we have got to make a big effort next weekend because you have got to win your home games in Europe.”

Meanwhile Scarlets coach Phil Davies has made two changes to the side that defeated Saracens in last weekend’s EDF Energy Cup with .
Gavin Evans returning to inside centre in place of exciting prospect Jonathan Davies while Nathan Brew gets his first start in Europe on the wing, replacing Garan Evans who slips out of the squad.

There aren’t many better impact players than Alix Popham and once again he’s starts the game from the bench which means Dafydd Jones will begin the match at No 8 for the second consecutive game.

Davies explaining that decision says, “Daf is playing well at the moment and we’ve got a lot of games coming up so it’s about rotating the squad and keeping consistency going in selection. It’s a case of managing people in different ways – the way things go we may need Alix for the next three games but it’s great to have strength in depth in a crucial area”.

And there was, not surprisingly, any mention of ageism when he was asked about Saturday’s opposition. “They have a lot of international players. Munster are a very robust and direct side but they are always capable of springing a surprise or two. We have great respect for them as they are well coached and playing Munster back to back is going to be huge challenge as you have two great rugby cultures coming together.”

For their part Munster will not name a side until shortly before they depart Shannon tomorrow but if Brian Carney comes through their final training session today it’s likely he will come back into the starting XV  having been forced out at the ninth hour ahead of Munster’s last outing against Leinster.
Speaking about that reverse, coach Declan Kidney doesn’t believe it will have affected morale ahead of the trip to Stradey. “Not all all. Obviously we would like to have won, but you often learn more about yourselves in defeat. Leinster are not unlike Llanelli in the way they play and predictions are that weather conditions are going to be similar. So we should have a fair idea what to expect.”

Nor does Kidney believe his side’s task will be any easier given that Llanelli have lost their two opening games, ” If anything, I think that makes them even more dangerous. I think it allows them play the game they like to and want to play.