No Joy For Munster. 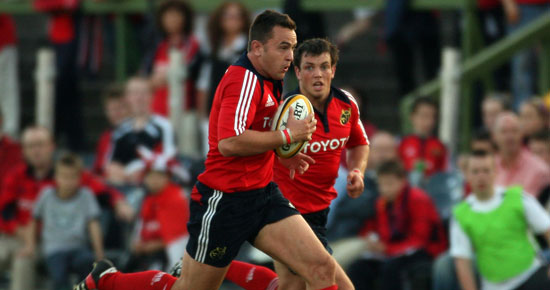 Two tries from Blues wing Tom James, one in each half, sent Munster crashing to a 19-17 defeat in this Magners League game played in front of a 6000 strong crowd at Musgrave Park.

Munster went 11 points down but fought back to leave just one point in it at the break (11-10) and then set themselves a mighty task when they conceded a second try to James at the start of the second half.

Nick Robinson then tacked on a penalty to put his side nine points clear but a period of Munster pressure in the final quarter ended with a Niall Ronan try converted by Warwick to set up a grandstand finish.

After Cardiff had a try ruled out, Munster came downfield looked to set up replacement out-half Jeremy manning for a drop-goal attempt but desperate Cardiff defence forced a turnover and with it, Munster last chance to snatch the spoils.

Robinson opened the scoring for the visitors with a penalty after seven minutes and just three minutes later they capitalised on confusion in the Munster defence to score a try from wing Tom James.

Robinson put them further ahead with his second penalty in the 27th minute and Munster supporters expectations were not helped when Paul Warwick missed from a very favourable position moments later.

However, the out-half made amends with a successful effort in the 37th minute and landed a marvellous touchline conversion of a Mark Melbourne try in injury time after Warwick’s clever kick had earned his pack a five metre line-out.

Cardiff extended their lead with that second James try and Robinson put them further ahead with his third penalty and although Munster showed plenty of courage to get within range of victory, they just didn’t show sufficent composure to close the deal.