No Joy at Musgrave Park For Gaffney. 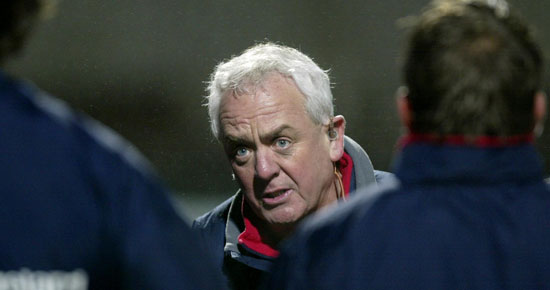 Alan Gaffney’s return to Musgrave Park did not have the sort of outcome he would have wished, his Saracens side going down 15-5 to a well fired up Munster outfit.

Alan Gaffney’s return to Musgrave Park did not have the sort of outcome he would have wished, his Saracens side going down 15-5 to a well fired up Munster outfit.

The visitors went five points up when Hugh Vyvyan crossed in the 15th minute after a smart counter attack but a try and conversion from Paul Warwick edged Munster into a fully deserved lead and one they were never subsequently to lose.

They led 7-5 at the break, went 10-5 up when Warwick landed a penalty in the 57th minute and rounded off the night with an excellent try from Tomas O’Leary in the 71st minute.

In an all round team effort O’Lary had a fine game as did his half-back partner Paul Warwick, hooker Denis Fogarty, flanker Niall Ronan, replacement Anthony Horgan while Mick O’Driscoll was excellent in the air and young Billy Holland was one who most certainly caught the eye with a very composed performance on his debut.

The occasion saw the introduction of Rua Tipoki as a 60th minute replacement for the impressive Lifeimi Mafi and the former Maori captain marked his first appearance for Munster with a try saving tackle and then got involved in the move that led to O’Leary’s final try.