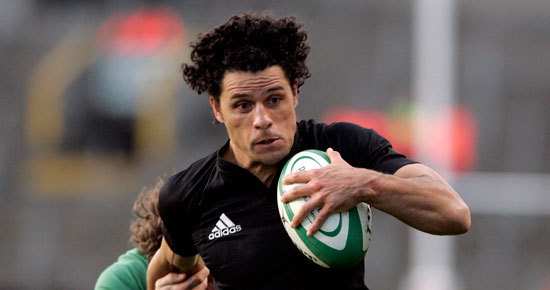 Munster Rugby has announced the signing of All Black Doug Howlett, who will commence a two and a half year contract on January 1st 2008, subject to medical and fitness clearance and the player obtaining a valid work permit.

Munster Rugby has announced the signing of All Black Doug Howlett, who will commence a two and a half year contract on January 1st 2008, subject to medical and fitness clearance and the player obtaining a valid work permit.

Munster Rugby Director of Coaching Declan Kidney says “We are delighted to have someone of Doug’s calibre and quality joining the squad.  A lot of credit must go to Munster Rugby CEO Garrett Fitzgerald and outgoing Manager Jerry Holland for acquiring Doug’s services in such a complex market.”

“There’s a lot of rugby to be played in the next few months, however we are looking forward to welcoming Doug to the Munster fold on January 1st.”

Munster Rugby CEO Garrett Fitzgerald says “Doug is a world class player at the peak of his playing career and is respected by all that know him.  Doug agreeing to join Munster is a great boost for our supporters, players and management.  We wish him well in the RWC and look forward to him and his family arriving in Ireland.”

Speaking on the move Howlett said “This was a very big decision to make. I have had an amazing rugby career in New Zealand and I am grateful to every person who has worked with me and contributed to that.

“I consider next year at Munster as a fantastic opportunity to play for another great club and experience a different lifestyle with my family,” says Howlett.

Twenty eight year old Howlett is currently the top try scorer in Super rugby.  He made his All Blacks debut in 2000 against Tonga and has since played 60 games for the All Blacks, including 59 Tests, scoring 43 tries. He is just four tries short of breaking Christian Cullen’s all-time All Blacks Test try-scoring record.

At Super 14 level, Howlett became the seventh New Zealand player to reach 100 Super 14 games and with six tries in the 2007 competition he also set a new record for the most Super 14 tries with 59.  For Auckland he has played 58 games and has scored 50 tries for the province.