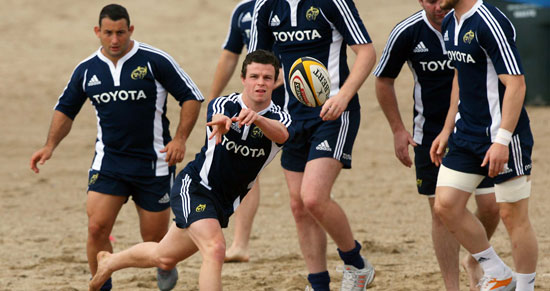 While Munster probably couldn’t picked a tougher environment to kick off their season, players and management alike are looking forward to Sunday’s encounter at Toyota Park.

Coach Declan Kidney when asked about the difficulty facing his side with so many players ruled out through RWC commitments chose to highlight the possibilities open to those wearing the Munster jersey on Sunday. “Of course it’s going to be a tough assignment. We want our players playing at the highest possible level and there isn’t any higher than World Cup. Our objective always is to bring players through to international level.  We are delighted to see so many of our lads representing their country, they are picking experience while they are away and can only come back better players. Hopefully we wont see them back until late October.

“But in the past we have seen fellas come back from World Cups who haven’t managed to regain their position because somebody while they have been away has put their hand up and  said I can do this job. That’s the opportunity our lads face now. We have a lot of younger players coming through and getting to play at this level is a rare experience for them and out of that you’d never know what you’d find.

” But yes it will be difficult for us on Sunday and in the opening part of the season. Thats the challenge and it’s a good one to have.

Kidney’s theme was continued by tour captain Anthony Foley when he was asked by Irish Examiner journalist Edward Newman what made this particular game so special, “The challenge.” he said firmly.

“For a provincial side to take on an international side, you really have to lift your game, I think this is our first time playing a national side on foreign soil. It’s a new experience for us all and I know all the players in the squad are really looking forward to it.

“I think it’s important for this group of players to get the season off to a good start. There may be guys who feel they have a point to prove, others looking to stake a claim to stay in the side and that leaves us with a very competitive environment at the moment. Its an opportunity for us to lay claim to the jersey, Its our first shot at doing that with the boys (RWC players) away. It means when they do come back they’re not just handed the jersey. Its very important for us to take that chance.”

“It’s great to see the likes of Gerry Hurley coming into the side, to see how Paul (Warwick) and Niall (Ronan) will. To see how we will all match up at this level. Really looking forward to it. Everyone is.” he concluded.