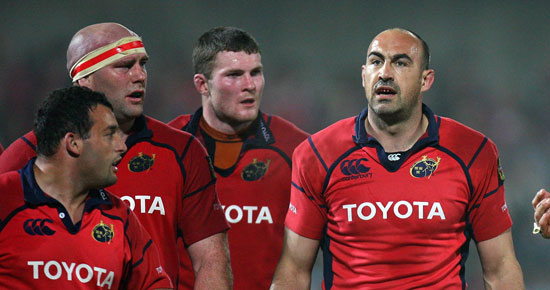 Munster have announced that they have agreed to the early release of Chris Wyatt from his contract to allow him extend his career abroad.

Munster have announced that they have agreed to the early release of Chris Wyatt from his contract to allow him extend his career abroad.

Wyatt was due to end his association with Munster in December and sought an early release in order to join the French club Bourgoin who are in Ulster’s group in the Heineken Cup.

Speaking about the move coach Declan Kidney said, ” Obviously with five back-five players away with the RWC squad things could be tight but we believe we have the resources to allow us release Chris with immediate affect and we wish him well in the future.

In turn Wyatt commented, “I am grateful to Munster for their consideration. Me and my family have enjoyed our time here in Munster where we have always  been treated in a fair and friendly manner and made very welcome by the staff and fans alike.”

Meanwhile, Barry Murphy is making a good recovery from the minor surgery he underwent some weeks ago to the ankle he injured against Ulster in March 2006.  Explaining the operation Murphy said, “I needed to have a piece of bone growth removed. It’s apparently a normal enough thing to happen to have this growth after the type of injury I had. It just needed removing. Everything went fine. I am back jogging so everything is going to plan.”

It is of course a bit frustrating but, I suppose part and parcel of the game and just a question og getting on with it. I am hoping to be back in full training by the time the Magners kicks off.

Murphy will travel with the squad to Chicago.