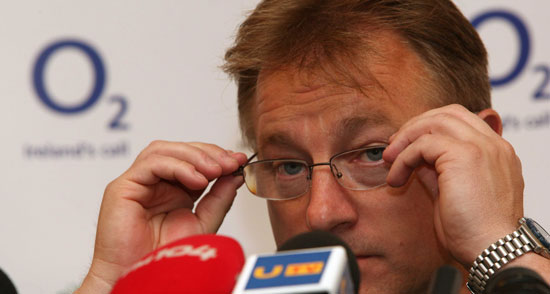 Quinlan made his international debut as a replacement in the game against Romania in Lansdowne Road in October 1999 having been drafted into the Irish squad to replace David Corkery who had to withdraw with a back injury.

In Australia, of the newcomers, O’Callaghan was the rawest with just five caps under his belt and next to him in terms of international experience was O’Connell who had represented his country 10 times prior to the start of the 2003 event,  followed by Horan (12) and Frank Sheahan (13).

Hayes, Stringer and O’Gara had 34, 36 and 33 international caps respectively.

Brian Carney (Clonakilty): Just turned 31. Born in Cork, moved to Wicklow and was educated in Clongowes Wood College. After that

he played with Lansdowne FC before embarking on a highly successful Rugby League club career with Gateshead, Wigan Warriors and Australian NRL side Newcastle Knights as well as Tri-Nations with Great Britain. He switched codes last season and marked his debut for Munster with a try in their victory over Ulster in Ravenhill. He made his international debut a try scoring one also against Argentina in Santa Fe and won his third international Union cap against Scotland last Saturday. Munster Caps 5. Munster debut v Ulster, Ravenhill, Magners League, March 20th 2007.

Jerry Flannery (Shannon): 28 year old. Born in Galway educated in St Munchin’s College, he began his professional career with Connacht before switching to Munster. Became a regular in the Munster side folllowing the injury sustained by Frank Sheahan in the Heineken Cup game v Sale in October 2005 and the following month he made his international debut against Romania. He scored a try on his Six Nations debut v Italy and was the regular starting number 2 until injury opened the door to Rory Best. A return to action for the Munster side from injury saw him return to the Ireland squad for the recent Six Nations championship. Munster Caps: 53.  Munster debut: v Llanelli Scarlets, Thomond Park, Celtic League, Sept 2003.

he was educated in Rockwell College and University College Cork. Represented Ireland initially at Schools level before progressing to the Ireland Under 21s and made his senior international debut in the friendly against USA in Lansdowne Road November 2004. Since then except for injury has been the regular number 8 on the Ireland team.

David Wallace (Garryowen):  Celebrated his 31st birthday last month. He was educated in Crescent College Comprehensive and RTC Cork. Made his international debut against Argentina in Buenos Aires in June 2000 and was on the Lions tour to Australia in 2001. A surprise omission from the last World Cup squad and in and out of favour for two seasons he returned to make the number seven shirt his own at the start of the ’06 Six Nations and hasn’t given it up since.

with his Ireland captain Brian O’Driscoll. He teamed up again with O’Driscoll to win the 1998 Under 19 World Cup under his current Munster coach Declan Kidney. O’Callaghan made his international debut as a replacement against Wales in Cardiff (2003). He made a very positive impression with the Lions in New Zealand and played a major role in Munster’s Heineken Cup success.

Paul O’Connell (Young Munster): The Limerickman will celebrate his 28th birthday on the day of the World Cup final. He was educated in Ard Scoil Ris and like his Munster/Ireland second row partner O’Callaghan has played at every international  level from Schools upwards. Since making his debut against Wales in February 2002, save for injury, he has been an automatic choice in the Ireland team ever since. Also an automatic choice for the Lions New Zealand tour he played in three Test games and last season was voted Guinness Rugby Writers Player of the Year. Munster Caps: 80. Munster debut: v Edinburgh, Myreside Celtic League, August 2001.

Marcus Horan (Shannon): 29 years of age, he was educated at St. Munchin’s College and Limerick Institute of Technology. He played

on the same Ireland Under 21 side as current colleagues Brian O’Driscoll, Geordan Murphy, Peter Stringer, Donncha O’Callaghan and Simon Best. A long time understudy to Peter Clohessy at both international and Munster level, he made his international debut against the USA on the June 2000 tour. Munster Caps: 124. Munster debut: v Connacht, Interprovincial Championship, August 1999.

Frank Sheahan (Constitution): The 30 year old was born in Canada educated at Presentation Brothers College Cork and UCC and made his international debut in Canada against the United States in June 2000. Understudy to Keith Wood on the Munster team he made the red number 2 jersey his own, when Woods returned to Harlequins, until serious injury against Sale Sharks threatened to end his career. Admirably, he fought his way back from that injury to recover his place in the Munster side and now the Ireland squad. Munster Caps: 135. Munster debut:  v Western Samoa Musgrave Park, November 1996.

Peter Stringer (Shannon): 29 years of age, educated, like Sheahan at Presentation Brothers College Cork and UCC and again like

Sheahan just one of 11 current Munster players to have player over 100 times for Munster. He made his international debut in the Six Nations game against Scotland in February 2000 at Lansdowne Road and since then has basically been first choice Irish scrum-half. Will forever be remembered for the crucial try he scored against Biarritz in the Heineken Cup final. Munster caps: 126. Munster debut:  v Ulster Musgrave Park, Interprovincial Championship Oct 1998.

Ronan O’Gara (Constitution): Born in San Diego, a little over 30 years ago, he followed the same educational path as Stringer and Sheahan and pretty much the same rugby career path as well. The word ‘leading’ attaches easily to O’Gara: leading Irish points scorer (742), leading Munster points scorer (1246). He has played in three Heineken Cup finals. Has toured twice with the Lions. He won the first of his 72 international caps in February 2000. Munster Caps: 132. Munster debut: v Connacht, The Sportsground, Interprovincial Championship Aug 1997.

John Hayes (Bruff): The farmer’s son from Cappamore will celebrate his 34th birthday in November. He was educated at Doon CBS

and began his rugby career with Junior side Bruff before moving to Shannon where he won an AIL League medal. He then spent two years with the Marist club in Invercargill, rejoining Shannon on his return where he won another AIL League medal and he won his first international cap with Stringer and O’Gara  against Scotland in February 2000 at Lansdowne Road. Munster Caps: 136 Bruff. Munster debut: v Connacht, Interprovincial Championship August 1997

Alan Quinlan (Shannon):  The farmer’s son from Limerick Junction, has just turned 34 and will be competing in his third World Cup competition. Considering injury and a suspension earlier this season, the Tipperary native has come from a long way down the field to claim a place but deservedly so given his performances for Munster and  on the Argentine tour. Playing with the Clanwilliam club when he captained the Irish Youth (U18) side against Scotland 1993 and six years later made his senior international debut against Romania at the ’99 World Cup. Injury against Argentina (World Cup 2003) and then against Sale Sharks (Oct 05) effectively ruled him our for two seasons but to his credit he has overcome these difficulties to earn his place in the squad. Munster Caps: 137. Munster debut: v Western Samoa, Musgrave Park, November 1996