No Surprises From A Munster Point Of View 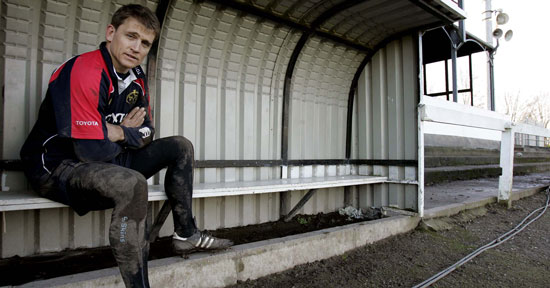 A trip to London for the opener against title holders London Wasps, a trip to Stradey Park in game three with French sleeping giants Clermont Auvergne squeezed in between is how Munster will start this year’s Heineken Cup

A trip to London for the opener against title holders London Wasps, a trip to Stradey Park in game three with French sleeping giants Clermont Auvergne squeezed in between is how Munster will start this year’s Heineken Cup

Last year, Munster made the trip across the channel to the English midlands and Welford Road where Shaun Payne was outstanding, solid as the proverbial rock, in his side’s rain-drenched 21-19 victory. This season Payne has moved ‘upstairs’, replacing Jerry Holland as team manager and not surprisingly, he brings the same calm to his assessment of Munster’s task as he did to the number 15 jersey.

“Its a very similar structure to the draw we’ve had in the past so there’s not a problem for us there. English team up first, hard game for us as it was last year, the French at home to start and then and then two games against the Welsh. So it’s nothing we’re not used to in that respect.

Although the venue hasn’t been confirmed, suggestions are that Wasps will look to play their game in a stadium other than their own Adams Park.  ” I have heard reports that they had enquired about playing at Twickenham but it wasn’t available. So I’m not sure what the situation is there. But  London Wasps are a very professional outfit and no matter how you look at it, it’s going to be difficult. Had it been Scarlets or the French away first up, I can’t imagine either being any easier. As I said, three very tough sides but we knew that when the draw was made.”

In Welford Road last year, Donncha O’Callaghan’s 9th minute fifty metre run ended in the big lock slaloming over for the first of Munster’s two first half tries and O’Callaghan, not fully recovered from the epic finish to the Cork Waterford match had hurling on his mind when asked to comment on the draw, the Heineken Cup draw that is. “My heart was in my mouth when yer man Eoin McGrath got inside at the end. I thought he’ll knock it over to level. Not too bad. Fair play to him though, he went for it. Brilliant save, twice. Great stuff.

“Now about the other draw, I just think that each year this competition gets tougher and tougher. From day one when the Pools were announced I’m not sure we could have have swopped anyone we got for a tougher side. I mean, you have the trophy holders, the side that beat us in the quarter final last year and a class French side.

“How important when and where we play them is hard to judge. There is an awful lot of pressure on you if you are playing at home in the opening game. If say we were home first game against Wasps and we didn’t win, it’d leave us travelling to France with  a huge job to do.  So maybe being away in the first game isn’t the worst place to be, I don’t know. Look I suppose what it really comes down to is you just have to be right on the day and if a few things fall right for you, you’re in with a shout. But if you’re not right, against any side, never mind the quality we’re up against, you’re in bother.”