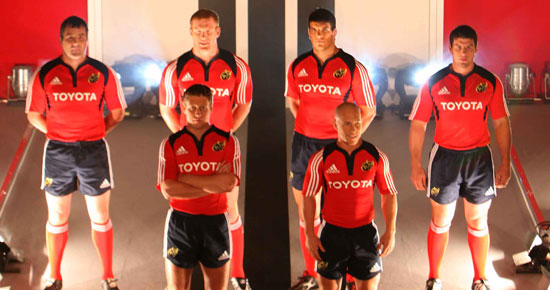 adidas, the world’s leading sports brand, and Munster Rugby have unveiled the club’s 2007/8 home kit as their new partnership was formally launched on Tuesday.

The 3 year deal is the first time adidas has sponsored an Irish rugby team and will see Munster Rugby wear the club’s most technological advanced kit ever. The new shirt features rugby specific ForMotion, which helps the kit move with a player’s body and works in conjunction with adidas Techfit compression under-apparel.  World renowned ClimaCool technology also features.

Garrett Fitzgerald, Chief Executive of Munster Rugby said “Munster Rugby is delighted to partner with adidas whose global brand appeal and heritage in rugby apparel is second to none. They bring with them all the latest kit technology yet have maintained a classic look to the shirt. This association will ensure the squad is fully equipped for the demands of modern rugby.”

Robin Money, Head of Sports Marketing, adidas Area North said “adidas understands the passion, power and heritage that is the backbone of Munster Rugby and we know that, coupled with our long history of rugby innovation, we can look forward to many years of success.”

Paul O’Connell, Munster and Irish lock, said: “The new adidas deal is great for Munster Rugby.  I wore adidas on the last Lions tour and I know their attention to detail is superb.”

The new shirts will be available in two types: the tight fitting playing version featuring ForMotion and a standard replica.