Tipoki On His Way To Munster 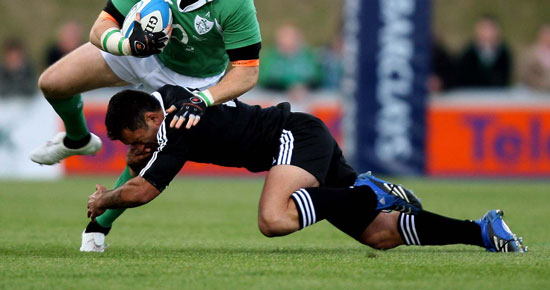 New Zealand Maori captain Rua Tipoki is set to team up with Munster subject to him getting medical clearance and obtaining a work permit.

New Zealand Maori captain Rua Tipoki is set to team up with Munster subject to him getting medical clearance and obtaining a work permit.

The 31 year old centre captained the Maori in the recent Churchill Cup competition in England and was one of the beaten finalists’ stand out players.

After an unforgettable Air New Zealand Cup season with North Harbour in 2006, during which he captained the team to Ranfurly Shield
victory, Tipoki moved to Christchurch to take up a contract with Canterbury. He was subsequently included in the Crusaders squad for the
Rebel Sport Super 14 and last started for the Crusaders as centre pertner to Casey Laulala in the Super 14 match against the Hurricanes at the Jade Stadium in Christchurch in April.
He played Super 12 with the Highlander and Auckland Blues and after a stint in Japan, Tipoki returned to New Zealand and was one of the stand-out players in Bay of Plenty’s Ranfurly Shield success, and Air New Zealand NPC top-four performance in 2004.

He was outstanding for the New Zealand Maori against the British and Irish Lions, during a season that saw him captain North Harbour in the Air New Zealand NPC and he brings a wealth of experience into the Munster set-up.