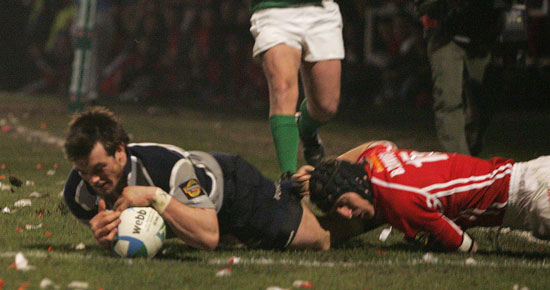 A 24-15 defeat by Llanelli Scarlets ended Munster’s interest in this year’s Heineken Cup at the quarter final stage at a packed Stradey Park. The defending champions trailed by 17 points at half time having played against the stiff breeze in the opening half. They did peg the Scarlets back with a penalty and a try but any hope of a comeback was ended when Barry Davies scored his side’s third try with ten minutes remaining. Munster did end with a late try that served to add a degree of respectability to the final scoreline.

The Scarlets were by far the better side and will count themselves unfortunate not to have won by a wider margin but even they must acknowledge that this was very far from a vintage Munster performance. The side were strangely flat, struggled to establish any continuity and coughed up ball regularly.

It may have been that the recent RBS Six Nations took more out of the players than was thought and Irish coach Eddie O’Sullivan’s comment after the final game (v Italy) that “there was nothing left in the tank” now seems particularly apt.

The score that really killed them arrived in injury time of the first half when they were 10 points down following a Dafydd James try, converted by Stephen Jones, and a long range  Davies penalty that went over via the cross bar. They had played against a stiff breeze in that opening half and the Scarlets really should have been further ahead, so a ten points deficit would have been more than acceptable given the amount of possession the home side enjoyed.

Then Gavin Thomas squeezed over in the left corner and Jones knocked over the conversion to leave Munster a mountain to climb.
They gave themselves a lifeline with an O’Gara penalty and a try from Ian Dowling but that lifeline disappeared when Davies ended a crisp Llanelli move with a try that Jones converted.

Afterwards there were no excuses, Munster acknowledging the better side won but it will grate that they relinquished their title so tamely.