No Surprises In Murrayfield 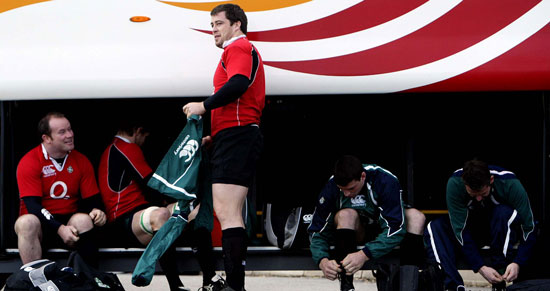 If it were horseracing and there was a seven-to-one on shot left in the race, most of the others runners would have been withdrawn at the four-day declaration stage.

Unless of course it was a Group One event, in which case a few trainers might leave their charges in, in the hope of picking up some place prize money. And that’s what Scotland are running for today.

There may have been a time when complacency could be considered a factor in this situation. But in Ireland’s case they probably had their few moments of complacency – in the final throes of the French game. And how dearly that cost them. And the players are still kicking themselves over that and are probably even more determined to compensate with a Triple Crown if nothing else.

In The Scotsman newspaper today, David Ferguson writes, “There is no place for fear in a game of this magnitude. The Scottish players know they must fight to regain pride today, but they cannot be afraid either to take Ireland on physically. A Scottish team playing with pride, a pack showing the strength, accuracy and never-say-die attitude of which they are capable, and backs running with dynamism and commitment, in defence and attack, for 80-plus minutes is what a packed Murrayfield will hope to see today. “

Then having said that Ferguson concludes, “If it is not enough to ruin the Triple Crown plans of O’Driscoll’s men, it will not come as a surprise.”

And therein lies the truth. Today, Scotland must play the perfect game. They cannot afford a missed pass, penalty, tackle or throw. And if they manage to do that, they’re still not guaranteed a win. Again as Ferguson suggests, “It comes down to the collective dynamism and precision of Scotland’s play; as individuals, they have no chance, as a solid, dynamic unit there is hope.”

Hope perhaps that they will turn in a performance that will restore pride and a degree of optimism for the future.

Ireland will miss Marcus Horan, have no doubt about that. Simon Best will leave no-one down but there is comfort in familiarity. And just as Peter Stringer’s absence had such an impact against France, it is only when Horan is missing that he is fully appreciated.

But Ireland thanks to Niall O’Donovan will survive his absence and once his pack have absorbed the barbarous assault that the Scots can be expected to visit on them in the opening stages, once Ireland catch their second wind, expect them to settle down and weave their magic way to a third Triple Crown in four years.