Munster Will Take Nothing For Granted 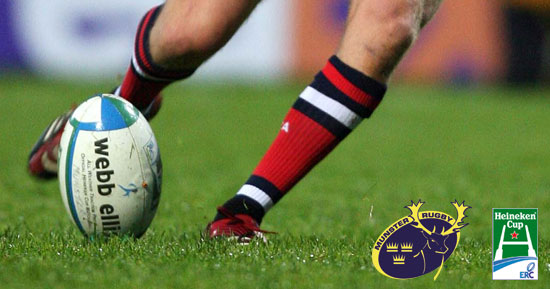 Although Bourgoin sit bottom of Pool Four, Munster will take nothing for granted when they take the French side on in Geneva on Sunday.

Munster coach Declan Kidney was more than a little impressed with the French side’s most recent performance, a 9-0 win over Biarritz in the French Championship. “They played really well.” he said, ” We saw it on TV. Any side that can hold Biarritz to nil has to be treated with the utmost respect”.

For their part Munster must prepare for this crucial test without Trevor Halstead and John O’Sullivan while back-up out-half Jeremy Manning had better news of his injury picked up, like O’Sullivan and Halstead, against The Dragons at the weekend.

The young Kiwi was forced out of the game in the 30th minute but a scan has shown that he suffered just soft tissue damage and Munster are hopeful that he may made be available to travel to Switzerland with the rest of the squad.

With Anthony Foley and Mick O’Driscoll back in the fold, O’Sullivan’s omission can be coped it. There is also an outside chance that Alan Quinlan could come back into contention should his appeal against that six week suspension be successful but Halstead’s loss will be keenly felt.

The South African has been in outstanding form of late, his line-breaking ability in the centre makes him a constant source of worry for opposing defences often drawing two defenders in an effort to stop him.

Other than the number 12 jersey though, Munster are spoiled for choice in the backs. The halves pick themselves but Kidney will spend some deal of time sorting out the other combinations.

He has to decide between Christian Cullen and Shaun Payne at full-back and that’s nice dilemma for any coach to have. Then there’s Ian Dowling, Anthony Horgan and John Kelly vying for a place on the wing and Tomas O’Leary could be added to that particular mix except he’s likely to be kept in reserve as cover for Peter Stringer.

On the few occasions when Halstead didn’t start at 12 this season, it was a Barry Murphy, Lifeimi Mafi combination in midfield, but Kelly can play centre – Kelly could probably play hooker if asked – Payne was outside centre when Munster beat Ulster in Musgrave Park earlier in the season so there are a load of options available to the coaching team.

Leicester Tigers host Cardiff Blues the day before Munster are in action. As things stand Munster are four points clear but with the Tigers expected to pick up a bonus against a Blues side whose focus now will have switched to the Magners League, the margin of error has suddenly disappeared.

Murphy, who missed the game in Wales with a stomach bug trained yesterday in Limerick with the squad as did Jerry Flannery and although Denis Leamy, another absentee from the Dragons match because of illness, didn’t train, he is expected to benamed in an extended squad tomorrow.