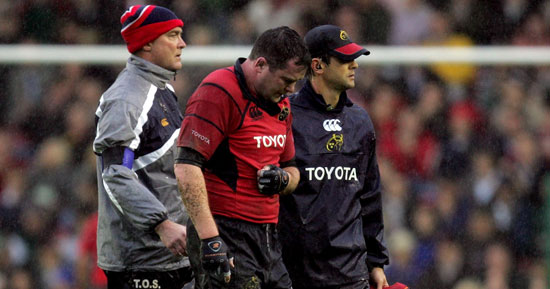 The Munster squad trained in Cork today ahead of the final Magners League game – before the break for Heineken Cup fare – against Newport Gwent Dragons in Rodney Parade on Friday evening. It’s a particularly gruelling schedule, three matches in nine days as coach Declan Kidney alluded to after the narrow victory at the Sportsground on Sunday, “Three games in nine days isn’t right for a player’s career at this stage especially guys who are trying to go and play Six Nations. So yes we will have change things around. We’ll see how they come through training, see who is in the best shape”.

The good news is that Anthony Foley, Marcus Horan, Mick O’Driscoll and Anthony Horgan took a full part in training and should they show no ill effects then they couldmake a timely return to the Munster squad.
David Wallace aggravated a shoulder knock, received in the game against Leinster, on Sunday and he is another who will be monitored before a decision is taken about his involvement for the weekend.

After two bruising encounters Munster can expect more of the same on Friday night in Newport against a side who are third from bottom of the table. Kidney’s task will be to tread that very fine line between individual needs and practical necessity. As he rightly pointed out there are those who just can’t be asked to turn out again but he also needs a strong squad if they are to get anything out of this trip.

The coach was clearly delighted with the way his side turned things around in Galway on Sunday. At half time, having had the wind and sheeting rain at their backs, Munster led 6-3 but by then had been reduced to 14 men following John O’Sullivan’s sin-binning in injury time of that opening half.

By the fifth minute of the second half the picture had turned even bleaker than the weather thanks to a Connacht score and another flash of yellow. On what was to be a rare visit to the Munster 22 Connacht scored a try when Ray Ofisa latched onto a lineout throw that was so crooked that even the thrower, Connacht captain John Fogarty, was visibly annoyed with himself.

However referee David Keane saw nothing wrong and awarded the score much to the chagrin of Paul O’Connell and Ronan O’Gara.
O’Gara’s protests earned him a yellow card and even though Mark McHugh missed the conversion Connacht, now leading 8-6, looked perfectly poised to record their first win over Munster for twenty years.

But as they had done against Leinster a few days earlier, Munster simply rolled up their sleeves, went back to basics, kept the ball, and ground out a well deserved victory.
A succession of close in scrums ended when they went wide and Christian Cullen sent the outstanding Tomas O’Leary over for a try on the right. O’Gara missed the difficult conversion and later a penalty in front of the posts but he made amends with his general play and control and knocked over a penalty kick with minutes of normal time remaining to ensure victory.

First Half Performance The Key