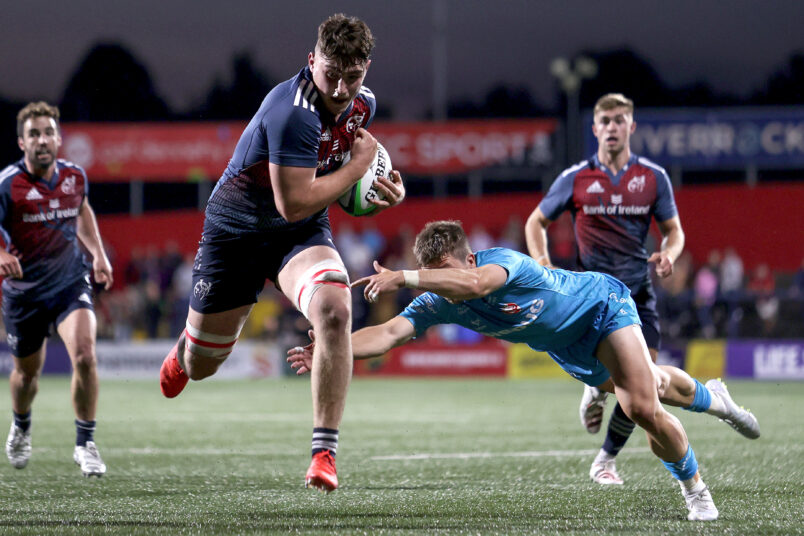 Ruadhan Quinn on his way to scoring his first Munster try. INPHO/Laszlo Geczo

Munster opened their pre-season campaign with a 19-28 loss to Gloucester at Musgrave Park as Calvin Nash, Alex Kendellen and Ruadhan Quinn all touched down.

Ruadhan Quinn’s introduction came earlier than planned with Jack O’Sullivan permanently removed for a HIA in the opening five minutes.  In addition to scoring a try on his first senior appearance the 18-year-old gave a good account of himself in the 75-minute performance with new Head Coach Graham Rowntree singling him out for high praise after the game.

Munster had it all to do in the second half as they trailed 21-nil at the interval with the visitors lead coming from an Ollie Thornley try and a brace from Chris Harris, with Scottish international Adam Hastings adding the three conversions.

While Gloucester enjoyed a bright start and the lion’s share of possession and territory, Munster struggled at the breakdown, had limited field position and were guilty of making too many errors.

However, they showed great composure to fight their way back into the game with a much improved second half that saw a three v one try return and two conversions from Jack Crowley.

Calvin Nash was the first to score shortly after the break as he finished quick hands out wide with Munster having the advantage inside the Gloucester 22.

The second try came five minutes later thanks to Alex Kendellen who crashed over after a series of short pick and goes close to the line.

Gloucester kept their lead ticking over with Jack Reeves scoring the visitors fourth try of the evening, and when converted by Lloyd Evans the scoreline was 12-28 after 65 minutes.

Munster again responded to claim the final score of the game thanks to Quinn’s converted try.

Overall, it was a valuable learning experience and workout for the 30-man squad against a quality Premiership side and the province will continue their pre-season preparation with London Irish next in Cork on Friday, September 2.

*James French who was named in the original squad was withdrawn.

Ruan Ackermann and Billy Twelvetrees will share the captain’s armband, each taking charge across 40 minutes with two teams playing a half, respectively. Skivington has selected a wealth of experience to take on the Irish province with Fraser Balmain, Ben Morgan and Chris Harris all in the matchday squad. Reece Dunn, Arthur Clark and Freddie Thomas are included amongst the younger players hoping to make an impact at Musgrave Park.