Munster A Bag Bonus In Cork 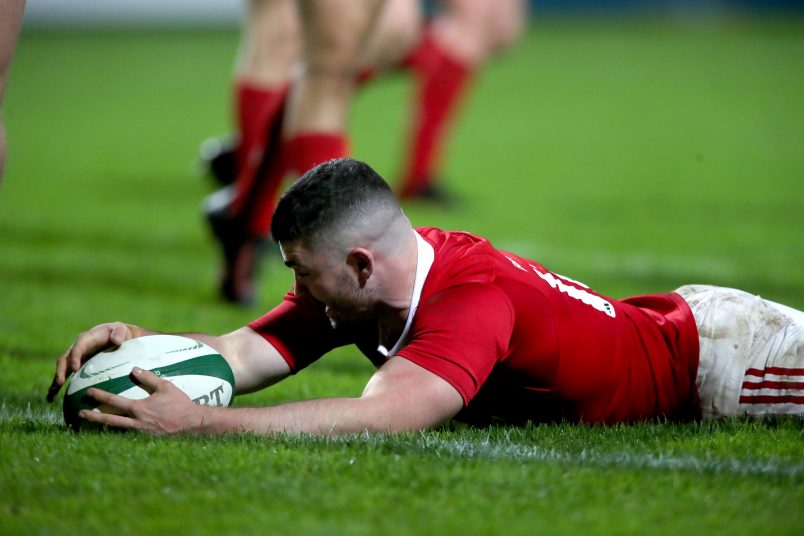 For a traditionally youthful and emerging side like Munster A, matching the physicality of an English Championship side such as Nottingham is never an easy thing to do, but that’s exactly what transpired in Irish Independent Park tonight as they recorded a comprehensive 38-7 win in round 2 of the British and Irish Cup.

With five tries, Bill Johnston had a busy night off the tee, the out half giving an inspired performance, kicking six-from-six in extremely windy conditions.

The sides traded tries in the opening half through Brian Scott and Oli Evans, but with the wind at their backs in the second, Peter Malone’s charges cut lose, outgunning their visitors in the physicality stakes, dominating set piece and giving an all-round clinical performance.  Consequently, tries came aplenty via an Evan Mintern brace, Sam Arnold and Sean O’Connor.

Playing the slippery conditions well, the province took the game to Nottingham up front from the off, making huge ground via the maul and when the game’s first penalty came Munster’s way it was no surprise that captain David Johnston opted for the corner.

With the lineout secured, the hosts set about pounding the Nottingham line, Scott eventually breaching the last-ditch defence on 7 minutes with Johnston converting.

Ian Costello’s travelling contingent saw precious little of the ball in the opening 20, and when they failed to release the tackled player on 16 minutes, Johnston was there to punish them further off the tee.

With their first visit to the Munster 22, Nottingham attempted to give the hosts a taste of their own medicine via the maul, but the emerging reds were more than up to the challenge.

However Nottingham would score before the interval.  Kicking cross-field off set piece, they were somewhat fortuitous with the bounce of the ball as it came off the post-pad before landing in the path of centre Evans who had the easiest of touchdowns.

Tiff Eden slotted the conversion to make it very much game on as the sides headed for the interval – 10-7 to Munster.

Less than five minutes into the second half Munster had a little more breathing room.  In the first instance Arnold was unlucky not to score after kicking ahead loose ball and putting on the after burners.  Munster did at least come away with a 5-metre scrum off of which there was no stopping Cork Constitution’s Mintern as he charged from the number 8 berth.

Now kicking with the wind, Johnston was again inch perfect with the conversion.

Arnold got his just deserves on the 52nd minute when Munster were again all too clinical for Nottingham, the centre going low and touching down for the hosts third try with big carries in the lead up from the academy trio of Gavin Coombes, his cousin Liam Coombes and Jack Power.

Johnston made certain of the extras.

In attempting to halt the dominant Munster maul, Nottingham found themselves down to 14 men – Tim Cardall seeing yellow – as the game entered the final quarter and the province set about chasing the try bonus point.

That came just minutes later when Mintern secured his brace off another strong scrum with Johnston making it a full seven-pointer.

Worse was to follow for the English side when a defensive lineout overthrow allowed the academy’s O’Connor pounce for Munster’s fifth with Johnston’s boot pushing Munster’s tally out to 38.

38-7 would be the final score, despite O’Connor seeing yellow soon after.  Try as they might, Nottingham were unable to make the man advantage count with Munster remaining defiant through to the full time whistle.