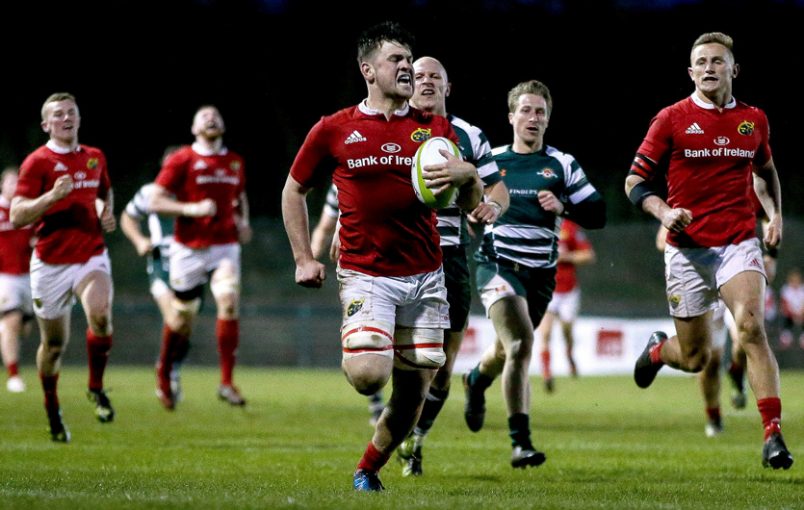 Conor Oliver runs in his second try of the night. ©INPHO/Tommy Dickson

For the first time since 2012, Munster A are through to the British and Irish Cup final with a thoroughly convincing and astute performance against Ealing Trailfinders at CIT this evening, Peter Malone’s charges winning out 25-9.

Although no man of the match accolade was officially awarded tonight, the general consensus among those in attendance was that Conor Oliver would be a worthy recipient.  Equally impressive in defence and attack, Oliver was central to all that was good about Munster A this evening, setting up the first try and adding a further two of his own with less than 50 minutes played.

To keep a side that had notched up 20 tries in their last two game tryless was testament to the Munster A defence, the remainder of the Munster points coming via the boot of the Johnston brothers.

Munster were however unfortunate to lose Bill Johnston to injury before half time.  The academy out half was removed from the field of play and taken to hospital for a potentially serious ankle injury.  He will continue to be assessed by the Munster medical team.

Scrappy at times from the off, a series of knock-ons and penalties cost both sides chances in the opening minutes, but make no mistake, Munster A came to play and looked to put width on the ball with some deft passing and neat interplay between backs and forwards.  Robin Copeland and David Johnston in particular also caused the visitors no shortage of problems early on.

Munster A’s opening pressure was eventually rewarded with a penalty in front of the posts on 16 minutes which Bill Johnston duly slotted.

The province then followed up with the game’s first try.  A barnstorming run saw Oliver cut inside the Ealing defence and bulldoze his way through the tackle before setting up a quick ruck off of which Sam Arnold touched down with Johnston converting.

The hosts’ attempts to illegally bring down a maul allowed Rory Clegg get Ealing off the mark but Oliver would continue to be a thorn in Ealing’s side.  This time a neat return pass with Kevin O’Byrne saw the academy back row race in for a try.  Losing Johnston to injury, his older brother David was just as assured off the tee in slotting the conversion.

A rising penalty count won’t have please Peter Malone and his coaching team with Clegg gifted two kickable penalties in as many minutes on the stroke of half time.  The outhalf converted both to make it very much game on at half time, 17-9.

Laying down a marker that this was to be their night, Munster A made the dream start to the second 40.  Who else but Oliver who continued his inspired performance with an intercept and speedy sprint to the right corner.

Johnston was just right with the conversion but would later add another three-pointer as Munster finished out a ten minute spell during which they were down to 14 men.

The hosts’ continued ill-discipline saw Robin Copeland sent to the bin, but Ealing failed to take advantage as Munster A controlled the game beautifully, an accurate kicking game keeping their visitors pinged firmly in their own half.

Try as Ealing might, there was no way through and Munster A deservedly booked their place in the final of the British and Irish Cup for the third time.

The men in red will have home advantage against either London Irish or Jersey on the weekend of April 21/22/23 with finalised dates, venues and kick-off times to be confirmed in the coming days.

Meanwhile Mark Chisholm and Shannon scrum half Jack Stafford made their B&I Cup debuts, Chisholm playing his first rugby since March 2016 after an extended break on the sideline due to concussion.