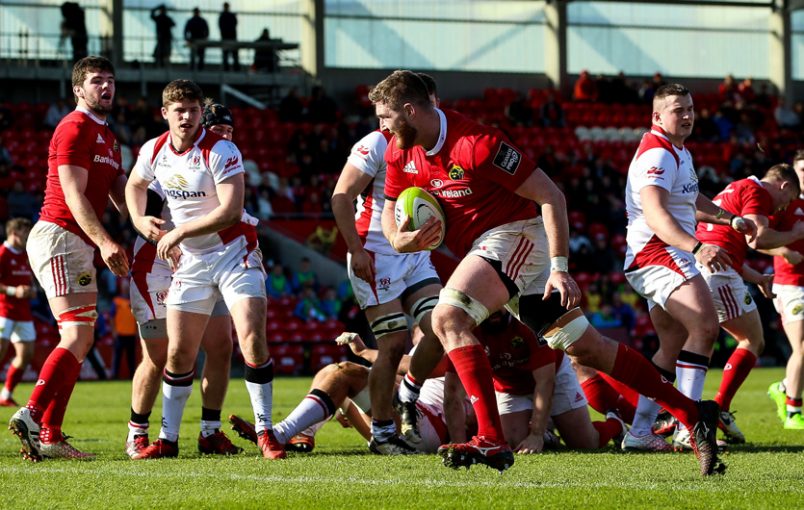 Munster A this afternoon booked their place in the British & Irish Cup semi finals, defeating Ulster A 26-3 at Irish Independent Park.

In an encounter where the northern outfit enjoyed much, if not most, of the possession, they failed to make it count unlike Munster who displayed a clinical edge, especially in the opening half.  Three penalties from the assured David Johnston, coupled with tries from Darren O’Shea and Sam Arnold saw Munster take a commanding 23-3 lead into the break.

Munster’s defence was the standout element of a somewhat lacklustre second half as Ulster tried in vain to chase down their provincial counterparts on the scoreboard.  Instead it was Munster who drew the only blood of the second half when Johnston kicked his fourth penalty with the result beyond doubt at that stage.

Johnston’s opening penalty got Munster up and running on 3 minutes but that advantage was soon negated when the hosts conceded two consecutive penalties deep in their own half.  Brett Herron missed the first but made no mistake on the second attempt.

Excellent running an deft hands down the left flank soon saw the Ulstermen back in the Munster 22 but, put to the pin of their collar early on, the men in red held firm as the visitors bashed through the phases from left to right before eventually knocking on.  A sign of things to come from the Munster defence.

Handling errors and a lack of cohesion at set piece dogged Munster early on and it was their continued steadfastness in defence that meant Ulster saw little return on the scoreboard for their territorial advantage in the opening 20 minutes.

Instead it was Peter Malone’s charges that nudged ahead on 22 minutes when Johnston bisected the posts with a superb long range penalty.  That was the spark that ignited Munster, with their set piece solidifying and their attack finding a cutting edge.  From there the opening half would be one way traffic.

Corkman Darren O’Shea was the first to cross the whitewash as soon as it was Munster’s turn to pummel Ulster through the phases, the second row hitting the gap and running in behind the posts to hand Johnston an easy conversion.

The Clonmel native’s next kick at goal was a sublimely struck touchline effort when converting Munster A’s second try.  Lovely hands from left to right found centre Sam Arnold popping up in the right corner and there was no stopping the former Ulster player as he crashed over.

Similar to the opening 20, Ulster dominated the territorial stakes upon the resumption.  In fact, second half visits to the Ulster half were few and far between for Munster as the northerners threw everything at them.  But to no avail.  In both set-piece and open play, Munster consistently did enough to force a penalty or knock on during Ulster’s repeated trips to the Munster 22.

Adding salt to the visitors’ wounds, Munster, despite their minimal possession, registered the only score of the second half, the in-form Johnston making it 6 from 6 off the tee in  slotting a 76 minute penalty and well and truly sealing Munster’s place in the B&I Cup semi finals.

Munster A will have home advantage over Ealing Trailfinders in the semis on the weekend of April 1/2.  A finalised date, kick-off time and venue will be confirmed in the coming days.