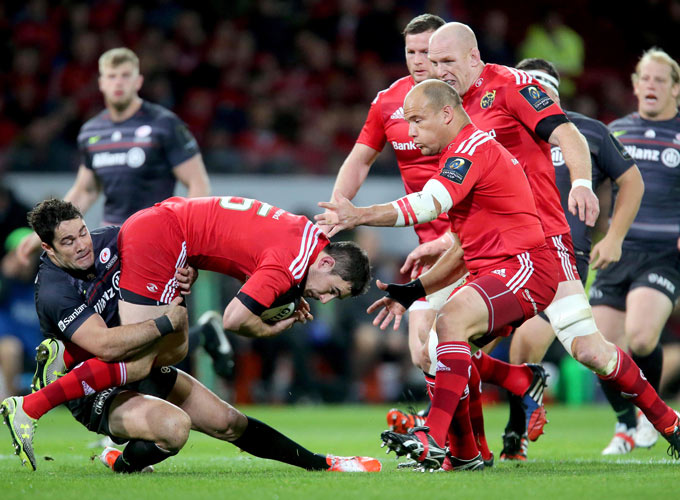 Head Coach Anthony Foley has named his side for Saturday’s round 5 clash away to Saracens in the European Champions Cup (ko 1pm) and makes eight changes to the side that started against Zebre last weekend.

After meeting with the specialist for a neck injury sustained against Zebre Conor Murray was ruled out of selection for this weekend’s encounter and the scrumhalf will be reviewed further after the weekend.

With Murray not available Duncan Williams comes in to make his first European start while Dave O’Callaghan and Keith Earls are named in a European matchday squad for the first time this season.

Further changes to the backline see Denis Hurley return to partner Pat Howard in midfield and Andrew Conway joining Simon Zebo and Felix Jones in the back three.

A clean sweep of changes are made in the front row with James Cronin and BJ Botha packing down on either side of Duncan Casey at loosehead and tighthead respectively.

In the second row Paul O’Connell returns to partner Dave Foley, while in the back row Peter O’Mahony reverts back to blindside with Tommy O’Donnell coming in at openside and CJ Stander continuing at number 8.

Should they make an appearance from the bench this weekend, Keith Earls will win his 100th cap for the province, while Ronan O’Mahony will make his European debut.

This game will be televised on BT Sport with live updates on Twitter: @munsterrugby #SarVMun

Munster Lose Out In London 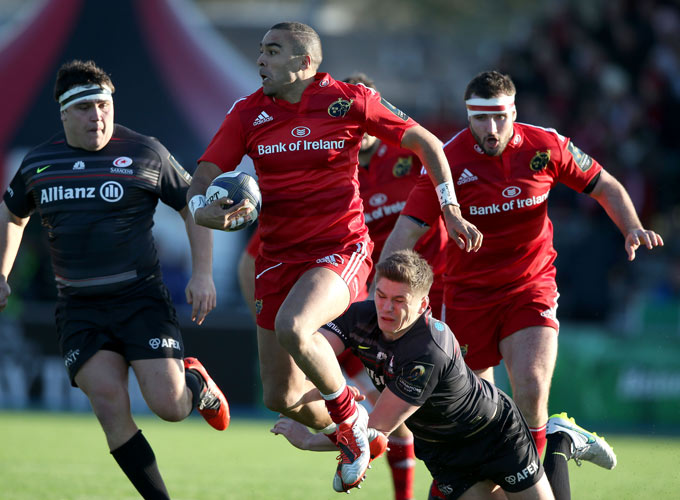 Munster this afternoon suffered a three try, 33-10 defeat to Saracens at Allianz Park, failing to secure European knock out qualification for only the second time in 17 years.

Through the boot of Duncan Williams and Ian Keatley, Munster tried to pin Sarries back in their own half from the outset but the Londoners returned all that was thrown at them with interest.

The first chance came Saracens' way when Alistar Hargreaves charged down Williams' clearance deep in Munster territory and it took a last ditch effort from the province to bundle him into touch.

A probing kick from Chris Ashton had Munster struggling to get back in numbers and when they went in off their feet, Owen Farrell was on hand to land the subsequent penalty and get Saracens off the mark on 8 minutes.

With the Saracens pack beginning to win the battle on the ground and in the scrum, and Billy Vunipola proving a wrecking ball across the park, Munster's problems were compounded further when an unlucky bounce of the ball for Keatley saw it go out in the full and give the hosts the put in to the scrum on the half way line.

From there they chose to go wide, creating a 2 on 1 overlap and Chris Wyles ran in Saracens' first try in 21 minutes which Farrell also converted.

Lack of precision in attack from Munster allowed the Englishmen to maintain the gap between the sides, a gap that Farrell extended by 3 on 29 minutes after Munster went offside in defence.

Worse was to come before the break when a quick tap from Saracens saw them spread the Munster line too thin, and playing clever heads up rugby, Wyles kicked beautifully behind the Munster line for a charging Ashton who touched down for Sarries' second try on 53 minutes.

Farrell landed the conversion together with another penalty on the stroke of half time and the hosts went into the interval with a comprehensive 23-3 lead.

Needing a massive performance and showing serious intent, Munster emerged from the dressing rooms early for running drills before the second 40 which they started sprightly, notably through breaks from Andrew Conway and Simon Zebo. However the ill discipline that dogged them throughout the game continued and Munster were penalised for holding on.

That was the last Munster would see of the Saracens' half for the next 25 minutes as the hosts attempted to turn the screw and secure a winning bonus point.

Onslaught after onslaught, out wide and through the maul, saw them camped in Munster's 22 for the majority of the half and it's credit to the province's never-say-die defence that all they conceded was two Farrell penalties, albeit that the second would see James Cronin yellow carded on 69 minutes.

Down to 14 men it was Munster who would strike next, touching down in only their second visit to Saracens' territory in the half. Breaking from the back of a scrum, they made good ground, and within inches of the whitewash, went through the phases and it was Denis Hurley who touched down for Munster's only try of the game on 69 minutes with Keatley on hand to convert.

However, Munster's hopes of a comeback were up in smoke within 5 minutes when the host's persistent pressure eventually told and, with the defence on the back foot, Ashton again exploited Munster's lack of defensive numbers and ran in the Londoner's third try, with Farrell also converting.

Try as they might, with Munster giving it their all in defence, Saracens were unable to secure the bonus point but still, ran out comprehensive 33-10 winners at Allianz Park.

The game also saw CJ Stander (ankle) and Simon Zebo (foot) leave the field of play injured and they will be assessed in the coming days. 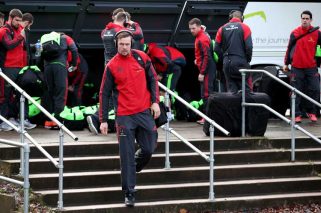 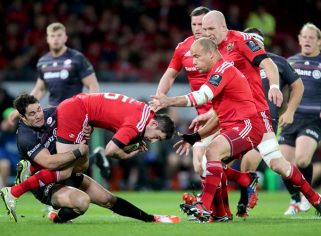