Munster’s path to the quarter finals became a little clearer last night following the outcome of events in Glasgow, then Montpelier and finally Exeter.

Northampton Saints ruled themsleves out of the equation with defeat in Glasgow and then Montpelier claimed one of the two 'best runner-up spots' with a win over Toulon before the Leinster game in Exeter.

And that proved to be a real cracker before Leinster did the business with a bonus point win that leaves Munster needing to deliver a four try victory over Racing Metro in what promimises to be a heaving Thomond Park Stadium later today.

They'll face a much changed Metro side who are out of contention yet with players who will be hoping to use this opportunity to impress Racing 'owner/trainer/jockey' Jacky Lorenzetti ahead of an expected clear-out of players at the end of the season. Olly Barkley will certainly be hoping to do enough to encourage Lorenzetti to take his eyes off Johnny Sexton in the hope it's remembered the role the Englishman played in Munster 's demise in the opening game.

In answer to the question where the tries will come from Munster know it's a case of making the most of the opportunities they are creating but first and foremost they must win the uoront battle and do what they did first of all in Murrayfield – winning the game – before they go about ending Leinster's campaign and putting them in pole to winning a place in the quarters ahead of the Leicester/Toulouse game later.

Five tries including a hat trick from Man of the Match Simon Zebo helped Munster to a 29-6 victory over Racing Metro and the second ‘best runner-up’ spot that will see them play Harlequins in the April Heineken Cup quarter final.

They did have to wait until the Leicester Tigers Toulouse game was completed but in the event of a Tigers victory, the French needed to score four tries and lose by less than seven, a scenario that never really looked likely at snow-bound Welford Road.

At a packed Thomond Park Stadium, Munster's task was made a little easier when Racing Metro wing-forward Antoine Batut was shown a straight red card by referee Wayne Barnes for apparently dropping a knee into Tommy O'Donnell. Whatever about the validity of that decision, O'Donnell went on to have a cracking game and along with Peter O'Mahony, Conor Murray and Dave Kilcoyne would have been a worthy recipient of the man of the match had a certain Mr Zebo not ripped the heart out of the Racing defence.

Munster were slow to get into their stride and there was a restlessness about their supporters as penalty kicks at goals were eschewed in place of touch finds with tries in mind. And it was from such a ploy that they opened their account in the 25th minute – at a stage when they trailed three nil – when Conor Murray thieved the ball from Mike Sherry to force his way over.
Ian Keatley tapped over the conversion and was lining up another four minutes later after Kilcoyne smashed his way up the middle and into the Racing 22. When the ball was spread wide, James Coughlan, Murray and Kilcoyne all handled before Earls delayed his pass precisely for Zebo to score.

The smoothly operating line-out with Donncha O'Callaghan and Donnacha Ryan in control, was providing the ideal platform and it was the genesis of the third try in the 30th minute Sherry driven over from a line-out maul by O'Donnell and O'Mahony and they might have had a fourth with almost the last play but Earls' kick and chase just rolled over the dead-ball before he could reach it.

However, the now buzzing crowd didn't have long to wait. And it was a try worth waiting for. Felix Jones began it when he fielded a clearance and countered. Keatley provided the link and Zebo then provided a clever grubber before skirting round defenders retrieving his kick for a sumptuous score.

The fifth came off another clean line-out, Murray attacking the gain-line with verve and venom, Keatley, Jones and Earls involved to send Zebo over the whitewash once more.

Afterwards a clearly emotional O'Callaghan spoke of the sense of responsibility the side felt. "We knew there was only one result that was acceptable to our supporters. To ourselves. We saw the huge support they bring. In Edinburgh it was just unbelievable. Here today. And we knew they'd felt left down over there. So there was only one way to make up for it and were were determined to make amends." 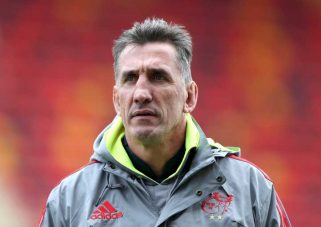