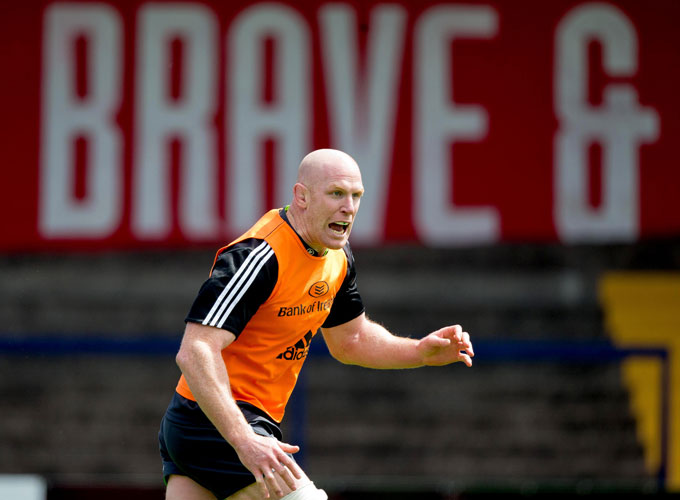 Anthony Foley has named his side to face Newport-Gwent Dragons at Irish Independent Park tomorrow afternoon (KO 3pm) with Ian Keatley set to win his 100th cap for the province, while Paul O’Connell will line out in Cork for the first time this season.

The Head Coach makes a number of tactical and injury enforced changes. It has been confirmed that Tommy O’Donnell sustained a torn hamstring in Saturday’s game against Ulster and is expected to be side-lined for approximately 6 to 8 weeks.
Simon Zebo is another ruled out of this weekend’s action after failing to recover fully from back spasms, however, the winger is expected to make a return to full training next week after further rest.
Duncan Casey and Peter O’Mahony were late withdrawals from this week’s squad preparations with the hooker reporting mild back pain and the squad captain picking up a knock in training yesterday. Both players are expected to take a full part in next week’s programme. In total, five personnel changes are made to the side that drew 23-23 away to Ulster last Saturday with Denis Hurley named as captain for the 6th time this season.
John Ryan and BJ Botha come into the front row on either side of Eusebio Guinazu and with Donnacha Ryan making the switch to 6 this weekend, Billy Holland returns to the starting line-up alongside Paul O’Connell in the second row. This is the first time O’Connell has played at the redeveloped ground, and coincidentally, the last time he played in Cork was against the Dragons, in September 2013. Ryan is joined in the back row by Paddy Butler at 7 and last weekend’s Man of the Match CJ Stander who continues at number 8.
Conor Murray and Ian Keatley – who wins his 100th Munster cap – remain at half back, as do captain Denis Hurley and Andrew Smith in the centre, while the only change in the backline sees Ronan O’Mahony join the back three alongside Keith Earls and Felix Jones.
Munster v Newport-Gwent Dragons, Guinness PRO12 Round 22, Saturday May 16th at Irish Independent Park – KO 3pm.
Munster: Felix Jones; Keith Earls, Andrew Smith, Denis Hurley – capt., Ronan O’Mahony; Ian Keatley, Conor Murray; John Ryan, Eusebio Guinazu, BJ Botha; Billy Holland, Paul O’Connell; Donnacha Ryan, Paddy Butler, CJ Stander.
Replacements: Niall Scannell, Dave Kilcoyne, Stephen Archer, Sean Dougall, Jack O’Donoghue, Duncan Williams, JJ Hanrahan, Andrew Conway.
Munster v Newport-Gwent Dragons, Guinness PRO12 Round 22, Saturday May 16th at Irish Independent Park – KO 3pm. Join us on the #HomeRun from just €;20 for Adults, while great value Family Terrace Packs are available from €;40. Purchase tickets online here, from the Munster Rugby Ticket Offices at Irish Independent Park and Thomond Park, or by calling 0818 719300. Tickets will also be on sale at the ground tomorrow morning at 10am from the Dolphin Gate, and from 1:30pm at the Sunday's Well Gate.

Munster Do The Job In Cork 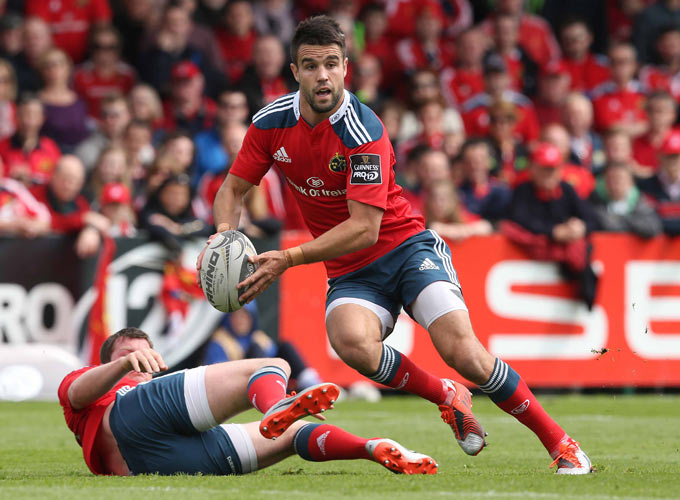 Munster have earned themselves a home semi final, to be played in Thomond Park Stadium next Saturday, following an excellent eight-try performance against the Newport Gwent Dragons.

Munster began the game knowing a victory was essential, relying also on results elsewhere, given they were one of three teams tied at seventy points apiece at the top of the PRO12.

The opening ten minutes of the game had three tries alone to enjoy. Dragons applied the early pressure and were rewarded for such by Tovey punishing Andrew Smith’s knock-on in front of the posts with a routine penalty kick in the second minute.

The Munster response was instantaneous. Paul O’ Connell turned over the ball through a brave blocking down of Evans’ kick as he looked to clear Keatley’s restart, and it wasn’t long before Murray was on hand to supply Smith who had the pace to get away from his opposite number and score under the posts. Ian Keatley added the extras with the easiest of conversions.

The celebrations of that score had only briefly concluded before the Dragons had a try of their own. No. 8 Taulupe Faletau running unopposed from his own ten-metre line and offloading to the supporting Ashton Hewitt who evaded the grasp of the defending Keith Earls to score. Tovey did exceptionally well to convert from the sideline and put his side ahead once more.

The Munster faithful were cheering another score again just three minutes later as CJ Stander rounded off the strong rolling maul of the O’ Connell-led attack with his ninth try of the season. Keatley added the extras comfortably.

There was to be no respite for the Dragons as Earls came within five metres of a try of his own as Jones dummied away from two tacklers to start the line-break on fifteen minutes. Conor Murray was to leap over the ruck before him in order to score after Billy Holland won the line-out deep within the Dragons 22 as the seemingly unstoppable Munster maul poured forward yet again with Botha being the one to carry.

Points from tries were of the essence if a high table position was to be attained and this was evident in the kicking to the corner of many Munster penalties that may have been kicked on another afternoon. Indeed it was Keatley who tapped and went when in front of the posts and Murray was in tow to score his second, rewarding Smith’s ball carry that brought his side into the five-metre line.

With the bonus point already secured by the twenty-third minute, Keatley put further daylight between the teams with another well-taken conversion.

The Dragons were certainly not giving the game up without a fight and had unending pressure of their own as half-time approached. Credit must go to the impressive defensive display of Munster who withstood all that the Brok Harris and Cory Hill engineered phases could throw at them.

The final act of the half was to be another try, this time from Paul O’Connell, who marked his first appearance in Cork this season with a try after another maul that had no answer from the Dragons. Coincidentally, it was also to be his first PRO12 try since March of 2013, that score also coming in the Rebel County at this stadium.

Keatley’s kick that drifted close to the far post, but unfortunately wide, heralded the referee’s whistle, calling time on a brilliant first half performance.

The second half began with another Munster try to celebrate, this time from Keith Earls. Captain Denis Hurley partnered up with Smith to lead another line break that burst through the Dragons defensive line and Earls received the fantastic offload to run in and score.

Keatley will be thankful for the pace of his backline targeting tries close to the posts, slotting over his third kick that came from the kindest of angles.

Jason Tovey led the charge for the Dragons throughout the game, this being evident in his ball carry that required three tacklers alone to stop but it wasn’t enough to prevent Tyler Morgan from handing off Earls before grounding beneath the posts, the simplest of conversions ensuing.

A trio of substitutes were to enter the fray shortly afterwards, Niall Scannell and Dave Kilcoyne on in place of John Ryan and Eusebio Guinazu respectively, with Keatley receiving a round of applause from the home crowd on the occasion of his one hundredth appearance for the province, JJ Hanrahan his replacement.

Earls came close to his second of the afternoon after sprinting away from four would-be tacklers on the Dragons ten-metre line and coming ever so close to a score before being brought to ground. The try was to be found however, Murray registering his hat-trick in the corner with the drive forward coming from another rolling maul. Hanrahan was subsequently presented with an unfavourable angle, but still went close with his conversion attempt.

A similar break away of sheer acceleration was threatened by Dragons’ Tom Prydie upon his interception of Hurley’s pass, his fumble preventing him from getting away from within his own twenty-two metre-line, such was the high line of attack held by Munster.

There was a try to be celebrated though once substitute Rhys Buckley, on in place of the previously sin-binned Hugh Gustafson, beat away the tackle of Jones to score in the corner. Prydie was on kicking duties at this stage and was too far to the right with his attempt from close to the sideline.

With the high tempo play continuing there was always to be a defensive risk at hand, and Sean Dougall did will to exhibit this with his interception and offload to Ronan O'Mahony who merely had to break the line and side-step away from a duo of tacklers before he had the ease of grounding for his side's eight try. Hanrahan struck the post with his kick on this occasion.

In a game packed with a dozen crossings of the whitewash, it seemed only appropriate that it should end with a try.

Evans fed Jack Dixon who bounced off of Andrew Smith before scoring in the same corner to Buckley, with Prydie off target from the same position.

The final whistle was met with a roar from the Irish Independent Park crowd who saw their side progress as second in the league to a home semi against Ospreys, who finished third without a bonus point in their 24-20 win against Connacht. 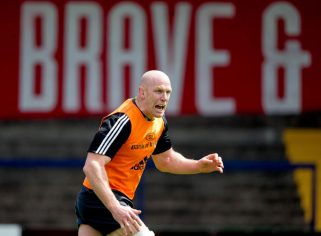