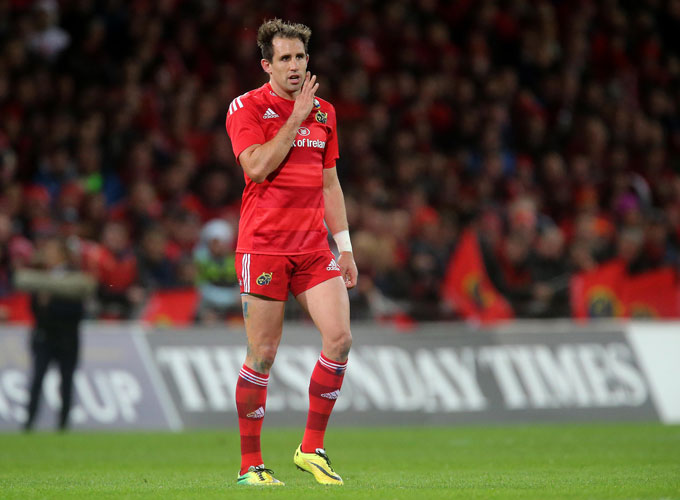 Head Coach Anthony Foley has named his 23-man squad to take on Clermont Auvergne in round 4 of the Champions Cup on Sunday, ko 4.15pm (3.15pm Irish).

After suffering a first home defeat to the French outfit last Saturday Foley makes four changes to the starting line-up for the return fixture.

In the pack John Ryan is the only change as he comes in for the injured Dave Kilcoyne and James Cronin to make his first start in Europe.

While in the backline Foley introduces a new midfield partnership with JJ Hanrahan starting at 12 and the returning Andrew Smith named outside him.

With injury ruling Gerhard van den Heever out Andrew Conway returns to take his position on the wing. 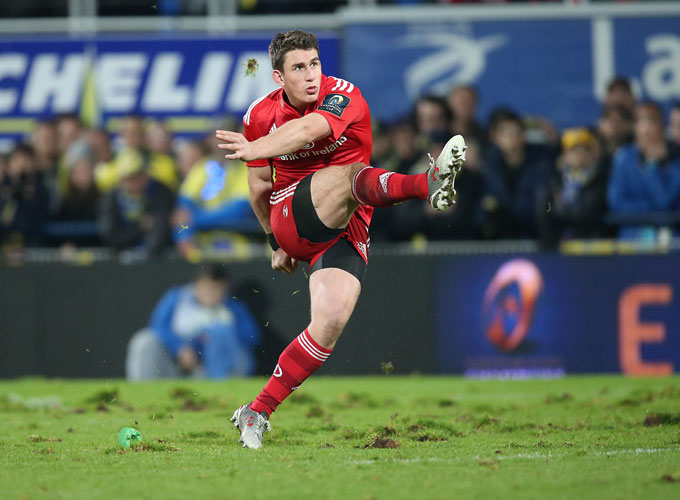 In the most dramatic of finishes a late Duncan Casey try coupled with an Ian Keatley penalty in the final action of the game secured a losing bonus point for Munster against Clermont Auvergne at the Stade Marcel Michelin.

At 26-9 to the hosts with ten minutes to go, even a losing bonus point seemed beyond reach, but you can never write off Munster. With Casey touching down from an intercept, Munster were left with four minutes to recover a fighting chance in Pool 1 of the European Champions Cup, and recover it they did – Keatley’s fourth penalty from four securing a losing bonus point for the province.

Munster were intent on laying down a marker from the off and would not be bullied like they were at Thomond Park last weekend. Returning to parity in the physical battle, good work in the ground, notably from the back row saw Munster win a number of turnovers in the opening minutes, one of which presented Ian Keatley with the opening penalty of the game.

Kicking from the half way line and out to the right, Keatley did well to beautifully bisect the posts on 4 minutes to hand Munster the lead over Clermont for the first time in the two-leg encounter.

In somewhat of a role reversal from last weekend, Munster continued to dominate possession in the opening minutes of the game, JJ Hanrahan and Keatley poking holes in the Clermont defence, the pack upsetting the hosts set piece, and the entire team making Clermont feel like visitors in their own back yard.

John Ryan, making his first European start, did well in presenting Keatley with another penalty at scrum time and Munster were 6-0 up after 11 minutes.

That was perhaps the rude awakening that Clermont needed, as in the following minutes Munster were reminded just how potent the French outfit can be. Loose kicking presented Camille Lopez and Wesley Fofana with the chance to run at and through the Munster defence, and after a number of phases it was captain Damien Chouly who led from the front in touching down for Clemont’s opening try on 18 minutes – Clermont back in the game.

With Lopez missing the conversion Munster remained in the lead, only to be penalised for not rolling away a few minutes later and Lopez would not miss a second time, handing Clermont the lead on 26 minutes.

Munster still managed to edge their way deep into the opposition 22, yet more often than not, after a number of phases found themselves becoming isolated and handing possession back to Clermont.

An infringement at scrum time presented Morgan Parra with a long range penalty to extend the host’s lead. However, a poor attempt from the scrum half was to spare Munster’s blushes only momentarily.

Just minutes later, more loose kicking from Munster saw Aurelien Rougerie and Wesley Fofana link beautifully to bring Clermont back into the Munster 22, and with Munster’s defence on the back foot and not set, Seru Nakaitaci made good use of his speed and athleticism to touch down at full stretch

First blood to Munster after the restart, Keatley slotting his third penalty on 41 minutes and brining Munster back to within one try and firmly back in the game.

When Felix Jones saw yellow for what was deemed to be a cynical challenge on Lopez, Munster weathered the ten minutes well, conceding nothing more than the three points for Jones’ original offence.

Yet that was merely the calm before the storm from Clermont. With the unforced error count rising from Munster and with travelling bodies beginning to tire, Lopez converted one of two penalty opportunities for the hosts before they very nearly crossed the whitewash again.

Super play from Fritz Lee saw him begin and almost touch down from a super Clermont attack that began deep in the Munster half – the dynamic number 8 just knocking on at the try line with a four man overlap to his left.

Penalties at scrum time allowed Clermont to find possession and territory deep in the Munster 22, with the Munster pack doing well to neutralise two Clermont line-out mauls before the hosts eventually found their way over the try line.

After the Munster defence was caught narrow, a crossfield kick from Lopez found his captain Damien Chouly who crossed for his second and Clermont’s third try.

Not for the first time in the game, Lopez failed to add the extras, a miss that would prove crucial given what was to happen next.

Chasing the bonus point, the Frenchmen went wide from inside their own 22, only for Duncan Casey to pick off a wide pass in the midfield and run in Munster’s only try of the match.

A flawless placekicking display saw Ian Keatley land every opportunity presented to him, including the conversion and what was to become the final action of the game – a last minute penalty to secure the losing bonus point. Credit also to the Munster pack who secured penalties both at scrum time and the breakdown in the final four minutes to bring Munster within range of the posts.

26-19 at the full time whistle and Munster live to fight another day. 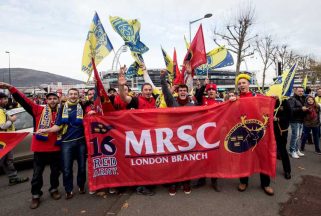 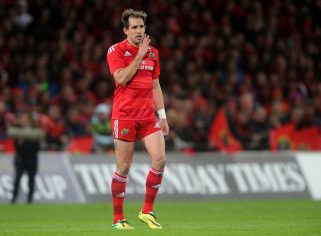