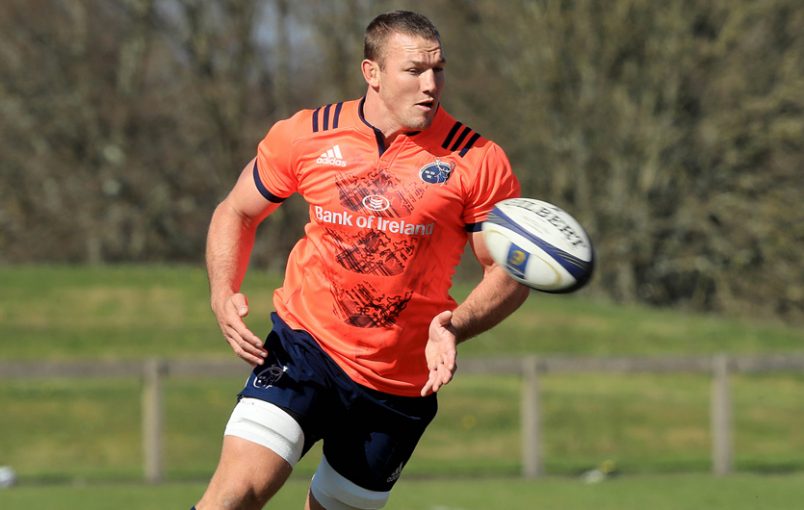 In total ten changes are made to the side that defeated Toulouse with Erasmus also including no less than six internationals on a strong bench.

James Cronin – who makes his 80th appearance in red – Rhys Marshall and Stephen Archer make up a new front row with Dave O’Callaghan coming in to join captain Billy Holland in the second row.

Jean Deysel is set to make his first appearance for the province having been named in a new look back row. The South African is joined by number 8 Jack O’Donoghue and the academy’s Conor Oliver whose rich form in the Munster A jersey sees him start at openside.

Duncan Williams and current PRO12 Golden Boot leader, Tyler Bleyendaal, continue at half back, while in the midfield, the return of Francis Saili sees him start alongside Jaco Taute for the first time.

In completing the changes, the Championship’s top try scorer to date, Ronan O’Mahony, and fullback Andrew Conway both re-join Darren Sweetnam in the back three.

Should he appear off the bench, Rory Scannell will win his 50th Munster cap.

This game is now SOLD OUT, Munster’s 9th sell out of the season.  Tickets will not be available at the ground tomorrow night with the ticket booth at the Dolphin gate open for ticket collections only.

Should you have an e-ticket, no need to print, you can use your smartphone to scan in on the day.

Please note that there is unreserved seating in the West Stand.

Earlier this week, MunsterRugby.ie got the pre-match thoughts of Jaco Taute. 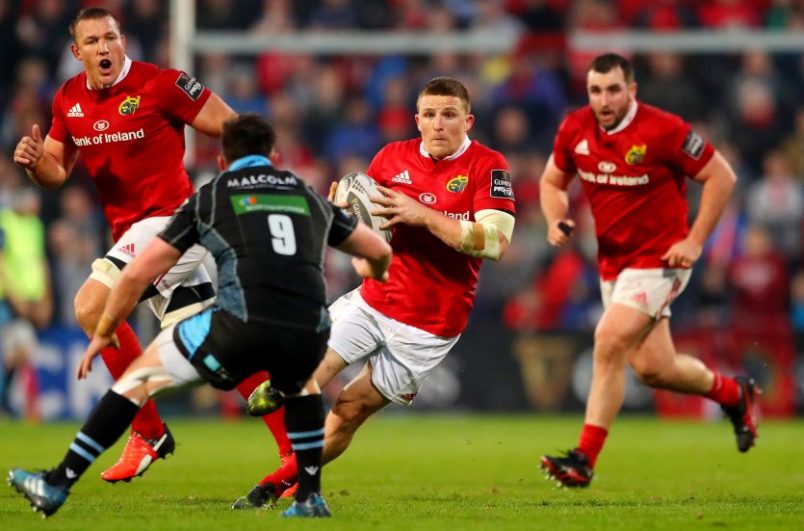 Munster v Glasgow was always going to be a hotly tested affair with both sides meeting for the fourth time this season.

And again it proved to be a one-point score in the difference as the province rounded off Cork’s Guinness PRO12 action of the season with a 10-7 victory over their Scottish rivals.

Although only seven points had been scored by the break it was a hugely entertaining contest from start to finish as Munster withstood a late Glasgow rally to push clear in second place.

It was all Munster in the opening minutes as newcomer Jean Deysel marked his debut in impressive style smashing into the Glasgow defence with huge carries while also making his presence felt at the breakdown.

The number 6 was central to the opening score as he edged Munster closer to the visitor’s line before a series of pick and goes saw James Cronin crash over from close-range.

Tyler Bleyendaal stepped up to add the extras, however, minutes later the Kiwi’s involvement ended prematurely when he was removed for a HIA.

The Scots grew into the game and the pace didn’t let up as both sides packed a punch with the capacity crowd at Irish Independent Park treated to an intense and hugely physical first half.

Fullback Andrew Conway was at the end of the aerial onslaught, chasing everything Glasgow threw at him while also making the hits when needed, in particular on one Lee Jones carry out wide as he bundled the winger into touch.

The men in red would go on to face a nervy finish due to missed opportunities coming by way of man of the match Conor Oliver and Ronan O’Mahony during the third quarter.  The TMO was kept busy as he ruled both efforts out before Rory Scannell slotted a penalty after Glasgow were pinged for holding on.

The visitors hit back through a Stuart Hogg try as the fullback chipped the Munster defence to claim the bouncing ball out wide and run in under the posts.  Finn Russell kicked the conversion to leave a three point margin going into the final ten minutes.

The strength in depth played its part as an experienced bench provided cohesiveness at a crucial time and the collective defensive effort stood firm to see off any further Glasgow threat.

Guinness PRO12 round 19 roundup:  It was confirmed post-match that Tyler Bleyendaal sustained a concussion while James Cronin needs to be assessed further for a knee injury.

Academy back row Conor Oliver was awarded the man of the match.  Rory Scannell made his 50th appearance for the province while Jean Deysel made his provincial debut.

In retaining second place Munster are seven points clear of Ospreys in third. 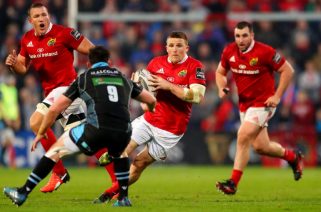 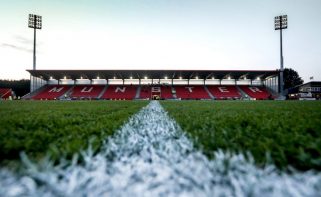