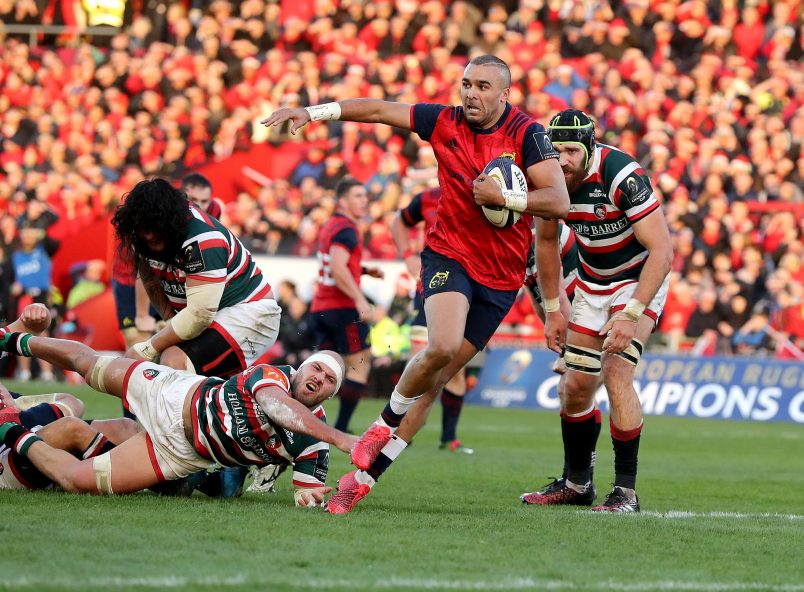 There is one change on the replacements bench as loosehead prop James Cronin, who scored two tries on his return from injury for Munster A last week, takes the place of Thomas du Toit.

An outstanding team performance saw Munster inflict a heavy defeat on Leicester in Thomond Park last Saturday and, as expected, Erasmus has stuck with the same starting side.

Last week’s Man of the Match CJ Stander is set to make his 20th appearance in the Champions Cup having made a round-high 18 carries last time round.

Darren Sweetnam keeps his place on the right wing and has started all 13 of Munster’s games so far this season.

A daunting task awaits Munster – since the back-to-back fixtures were introduced in 1999, Leicester have never lost both games.

However, Munster are the only side to beat Leicester more than once at Welford Road in Europe – in 2003 (quarter-final) and in 2006 (pool match). 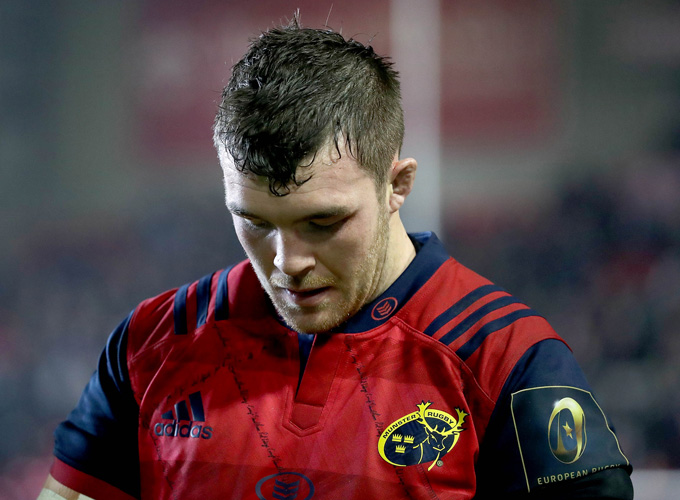 A long range Owen Williams kick in the final minute of the game broke Munster hearts this afternoon as the province came so close yet so far to their first win at Welford Road since 2003, the hosts just edging it on an 18-16 scoreline

The boot of Bleyendaal had Munster out to a 6 nil lead early on as Munster looked the far more assured side of the two in the opening 20 minutes, seeming to pick up from where they left off in Thomond Park as they threatened in attack and forced errors from the hosts.

The momentum shift ironically came as Leicester were reduced to 14 men – Manu Tuilagi for the second time in as many games. Perhaps serving as a wakeup call to Richard Cockerill’s men, from there on they were a different side and were far more purposeful around the park, particularly at the breakdown where two penalties allowed Williams level affairs by the interval.

Both Bleyendaal and Williams traded penalties before Tigers took the lead for the first time on 53 minutes – Williams penalty – and that lead was extended further when Simon Zebo was adjudged to have impeded the run of Adam Thompstone, Zebo seeing ten in the bin for his efforts with Williams slotting the three points.

Like Tigers had done in the earlier exchanges, Munster rallied when down a man and Niall Scannell crossed for the only try of the game with five left to play. Bleyendaal added the conversion to make it a one point game and with Tigers reduced to 14 men (Tom Youngs) for the second time after repeated infringements in the lead up to Scannell’s try, Erasmus’ men looked to have done enough.

One final twist however as Munster came to rue a penalty in the final minute of the game. Despite conceding it in the Leicester half, Williams’ long range effort had the legs to deny Munster a rare win in Welford Road and a first ever season’s double over Tigers.

The hosts came out of the blocks with gusto, working their way through the phases and making their way into the Munster 22, Tuilagi in particular making his massive presence felt in midfield. Tigers intent was clear, but so too was Munster’s defiant defence as it forced two crucial turnovers in as many minutes.

Cheered on by large travelling support and playing to the soundtrack of The Fields of Athenry, the men in red earned their first penalty on 9 minutes when Zebo was impeded from claiming a kick ahead by George Worth. Bleyendaal showed pinpoint accuracy to curl in the long range effort and get Munster off the mark.

Still Tigers came at Munster but their attack lacked precision, unlike Munster whose excellent work in the maul earned two consecutive penalties, the second of which Bleyendaal kicked at the uprights to extend Munster’s lead to 6-0 on 18 minutes.

A penalty put Tigers back into Munster’s 22 from where they looked to maul over the line. But to no avail, Munster continuing from where they left off last weekend in pummelling Leicester up front early on. The Munster pack halted the hosts’ advance before Niall Scannell, Billy Holland and Peter O’Mahony were to the fore in scavenging for the loose ball.

Munster were handed the chance to go nine clear when England hooker Tom Youngs failed to wrap in the tackle, but on this occasion Bleyendaal pulled his kick across the posts and it remained a one score game.

For so long the talisman for Tigers in the opening half, Tuilagi saw yellow for a late shoulder on Rory Scannell. Looking to make the man advantage count, Munster kicked to the corner and tried to go through the phases in the 22, a little too vigorously however as, in the cleanout, the support went beyond the tackled player and left man and ball exposed for Tigers flanker Brendon O’Connor who pounced to claim the turnover.

If anything, Tuilagi’s binning solidified the Leicester effort and following their most cohesive passage of play, Peter O’Mahony was pinged for interference at the breakdown as Tigers went from left to right along the Munster 5 metre line. Williams knocked over the easy kick in front of the posts on 34 minutes.

In stark contrast to the opening 20 minutes, Munster were glad to see the dressing room and regroup on 40 minutes as momentum began to swing the way of Tigers with Williams drawing the sides level on 39 minutes after Donnacha Ryan came in from the side at ruck time.

Munster did have a chance to nudge back in front when Tigers also came in from the side, but Bleyendaal uncharacteristically made it two consecutive misses off the tee.

6-6 at the interval with it all to play for in the second half.

After 50 minutes the game remained deadlocked as Bleyendaal and Williams traded penalties upon the resumption while a decisive score came on 53 minutes as Munster’s failure to roll away saw Williams kick Leicester into the lead for the first time.

With the game on a knife edge, both sides looked nervy as each coughed up possession on their own set-piece, Munster eventually bucking the trend with a massive rolling maul on 63 minutes that brought them into the Leicester 22 from where they went through the phases to the 5 metre line.

Under intense pressure, desperate defence from the hosts paid dividends when they forced the turnover as Munster opted to go right. A Thompstone break might have seen the winger run the length of the field save for the efforts of Zebo. However the Munster fullback was subsequently yellow carded for tackling the player without the ball.

It seemed a bit like rough justice given fact Zebo had committed to the tackle before Thompstone kicked ahead but regardless Munster were down to 14 men and by 6 points on the scoreboard when Williams added the resultant penalty on 67 minutes.

Much like Tigers had done in the opening half, with the odds against them, Munster rallied and were at their clinical best with 5 minutes left to play. The most reliable of weapons in the Munster arsenal, the maul, came to the fore and Tigers had no answer. The hosts infringed on a couple of occasions, merely prolonging the inevitable as Scannell broke and crashed over, all the time playing with a penalty advantage.

It might not have been the prettiest of strikes as he slipped while kicking, but Bleyendaal’s conversion made it over the crossbar and between the uprights handing Munster a one point lead.

With the aforementioned infringements seeing Tom Youngs sent to the bin and the reintroduction of Zebo, things were looking good for the visitors.

Alas there was to be one last twist in the tale, one that would end Munster’s unbeaten run of seven games, as Munster conceded a breakdown penalty just inside the Leicester half. Showing nerves of steel, the ice cool Williams stood up and landed one of the longest kicks in the European season to date, kicking his side to victory and ensuring Munster leave Welford Road with nothing more than a losing bonus point.

With a return to PRO12 action over Christmas – details below – Munster resume their Champions Cup campaign away to Racing 92 on Saturday January 7th.

Next Home Game:
It’s back to the Guinness PRO12 in a top of the table clash when Munster welcome old rivals Leinster to Thomond Park on St Stephen’s Day.

With over 25000 tickets sold there are less than 600 tickets remaining for the top of the table festive fixture.

In order to facilitate as many supporters as possible temporary seating will be added to the north and south ends of the ground.

The additional seated tickets are now available to buy online here, from the ticket offices in Thomond Park and Irish Independent Park, or by calling 061-421103. 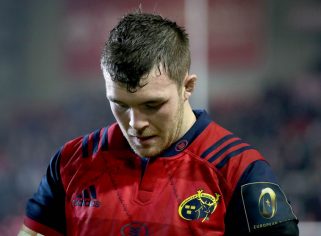 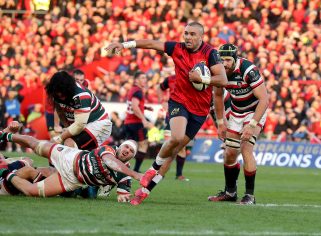 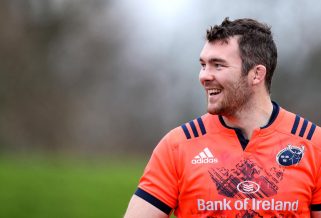