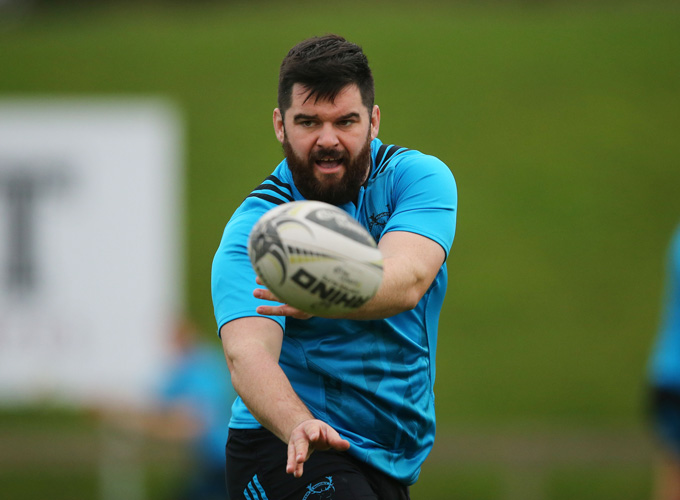 A number of players sat out today’s squad session in managing their respective knocks, while hooker Kevin O’Byrne and Greencore Academy lock John Madigan have both signed new contracts with the province.

A number of players sat out today’s squad session in managing their respective knocks, while hooker Kevin O’Byrne and Greencore Academy lock John Madigan have both signed new contracts with the province.

Back-rower Dave O’Callaghan sustained a concussion in last Sunday’s win over Treviso in Italy and is currently following return to play protocols.

Ian Keatley is the latest squad member to fall foul of the usual seasonal illnesses in recent weeks. The Munster playmaker sat out today’s session as did Cian Bohane (back spasm), Ronan O’Mahony (hamstring) and Tomás O’Leary (groin), all of whom continue to be monitored by the medical team.

James Cronin (hamstring) underwent running drills today and is expected to take a full part in training later this week.

Meanwhile, centre Denis Hurley has sustained a further calf injury and is expected to be sidelined for another 4 to 6 weeks.

A former Munster U20s player, O’Byrne joined the Munster squad at the start of the 2014/15 season off the back of impressive performances with his club side UL Bohemian RFC. In his first season as a professional player he went on to make 11 appearances, making his PRO12 debut starting against Edinburgh in Thomond Park in September 2014. The 24 year-old Corkman has featured on one occasion so far this season in addition to lining out for Munster A in the British and Irish Cup.

Madigan (pictured right) joins Rory Scannell, David Johnston and Sean McCarthy as the latest Greencore Academy player to be promoted to the senior squad next season. In his final year of the academy, the 21-year-old made his PRO12 debut against Treviso last September in Irish Independent Park after featuring in Munster’s pre-season games in 2014 and 2015. A product of the club pathway, the Charleville native previously lined out for Ireland U18s and although his game-time has been limited due to a string of injuries over the last two years, at 6’ 6” and 124 kg, the young second row has shown his future potential.